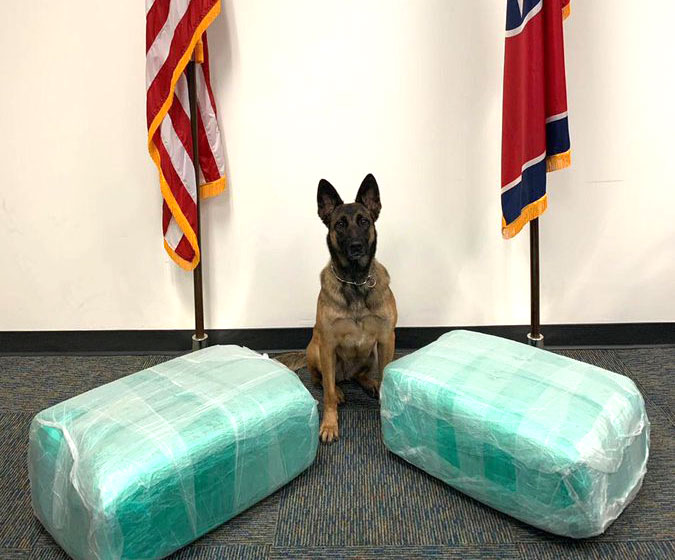 Who’s a good boy? That drug-sniffing dog from Nashville, Tennessee who sniffed out 87 pounds of weed inside some luggage from an SFO inbound flight and didn’t smoke any of it.

It is actually legal to fly on a commercial flight with marijuana — providing that you are flying in-state within California only, and your cannabis stash is one ounce (28.5 grams) or less. Once you cross state lines with cannabis, you are committing a felony. And you certainly don’t want to take an approximate quarter of a million dollars street value worth of marijuana into Tennessee, one of only eight remaining U.S. states where no form of marijuana is legal at all, not even medical marijuana, as they will throw the book at you if a German Shepherd smells your 87 pounds with of kind bud.

Reader, that is precisely what is alleged to have happened to local 26-year-old Julian Gioffre, as KRON4 picks up the story of 87 pounds of marijuana found in that luggage Nashville airport police say was registered to him. According to the report that originated from Nashville’s WKRN, “Airport police said a drug dog alerted officers Monday evening to two bags on a flight from San Francisco. Officers located the owner of the bags, identified in a warrant as Jullian Gioffre. The 26-year-old gave consent to search the luggage but said the bags were locked and he did not have the key, according to police.

“The bags were eventually opened by TSA, a warrant states. Inside, police said they found two bales of marijuana that weighed approximately 87 pounds.”

It’s difficult to say what the street value of that much weed would be in Tennessee, where all marijuana is illegal. But on San Francisco dispensary shelves, an ounce goes for about $200. Factoring that into 87 pounds worth, you’re looking at $278,400 worth of pot by our prices. Gioffre is also alleged to have had “Thirty-four grams of THC gummies” in his backpack, which at $20 for 100 mg, that’s about another $6,800 worth, give or take.

Gioffre was arrested, charged, and booked on drug charges and placed in a Metropolitan Nashville Police Department jail, with his bail set at $75,000.

Just last week, the same Nashville airport had an 85-pound marijuana bust from a flight originating in Los Angeles. These two big busts in a week may be a coincidence, but it’s reasonable to suspect a pattern. Now that any old stoner can walk into a dispensary and buy cannabis here, the illegal market in California is less lucrative. But that same underground-market weed can still draw a handsome price in states like Alabama or South Carolina where the underground market is still king, so the sensible move for illicit wholesalers is to ship or fly their ganja to dealers in those states.