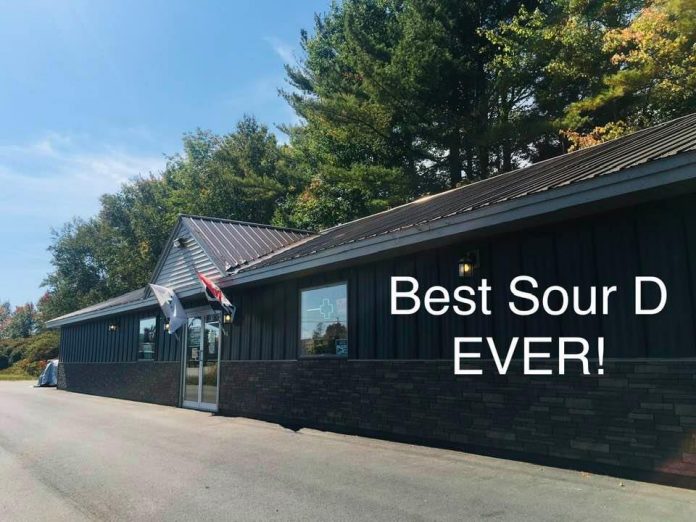 There I was out somewhere between nowhere and somewhere, desolate for sure. Route 2 nearing the outer rim of our great nation. Wilton Maine. Full Throttle. Pedal to metal. Nothing but open road ahead of me, open for miles and no one behind me either. I owned the road; the music cranked to 11 and the day was still young. The engine roared along side the sound track of life while the wheels spun like silica nanoparticle nanoscale rotors.

The world was a blur in my peripherals. The speed had taken hold. Focused and in the zone. Concentration unbreakable. Then my eyes locked in on a sign in the window of a store. It said, “We Have Sour Diesel”.

I locked ‘em up and pulled the e-brake and slid in sideways (I like to make a good first impression). I drifted in like a professional stunt racer and slid into the handicapped spot. What? I have a sticker; I’m psychotic.

The place was called The Power Plant. Plain brown building in the middle of untamed country. I was quick to make my way inside; Sour Diesel is one of my favorites. I try it whenever I see it on a menu no matter where I am. To be honest, most fall short. But from time to time one can come across a real hum-dinger. It’s like the Puerco Pibil in Once Upon A Time In Mexico.

I entered the building and was greeted by a happy, smiling, cute lady with dreads wearing hemp bracelets and probably patchouli. Cute. They had a very pleasant lay out, open floor plan with lots of glass along with in common wardrobe. The environment was very welcoming and friendly. I was checked in and was then led into the dispensary.

The Power Plant has a wall of fame. Pictures of all the strains lined the walls along with their lab results, pricing, and an encased sample that could be viewed with magnification. Pretty cool setup.

“The sign said We Have Sour Diesel. It grabbed my attention.” I said.

“Well, you definitely came to the right place.” Replied the clerk. She continued “The owner is also the grower and REALLY prides himself on this strain.”

“I try it anytime I see it on a menu. I really like the strain when it’s produced well.” I said.

The clerk simply turned around in silence and grabbed a jar from the cabinet behind her. It was full of kind nugs. Then the magic began, she took the lid off. That’s when it hit me, the aroma I crave on the constant.

It was like someone had submerged a pine tree overnight in diesel fuel and then lit it on fire. While the blaze is roaring someone would then begin to dump large amounts of rotten citrus rinds on the inferno until smoldering. That’s the smell that came from that container. I know… It sound’s awful described that way.

“Here, take my money.” I said as soon as the aromas nasalized me.

It was $25.00 for an 8th of 32% THC lab tested Sour Diesel. I pinched myself to make sure I was awake. It hurt, but then I moved along (I cried a little too.) I had to get to my destination so I could destroy it all in a series of small arsons. If it tastes like it smells, it was going to be a REALLY nice evening. And the nugs looked amazing too by the way.

I arrived to my destination soon after and displayed my findings to my brood. As we pulled apart the flowers for roll-up, the smell automatically intensified. Then rapid conflagration occurred. It was wonderful.

It tasted exactly how it smelled. Rich pungent essence of citrus, fuel, and herbally pine saturated my palate. It left quite an impression. We were all blown away, literally. The experience was completely euphoric. INSANE IN THE BRAIN. But this sativa strain was not a de-motivator. There was suddenly a spring in my step and the urge to engage in activities was strong. And it left me smiling for no real reason at all. That’s a happy ending.

No other chemical profile was provided. Only potency and HeavyMetal/Pesticide results were included.