I had returned at dusk… The rains had stopped and the grass across the hills glistened like shards of Jade. As the night sky darkened the jade turned to onyx and the campout lit up! In one area it looked like a UFO landed in the back yard, vendor village was lighting up like a carnival, the gateway of The Purple MooseHead was looking like a nexus to another dimension, and the art began to glow in the dark. There were people and vendors lighting up, literally. Plus there was something happening at all 3 stages. It was like organized Cannabis Chaos, with lots of accessible bathrooms hidden by glorious art. I had arrived.

I went on a hunt for Patrick Roach, I knew he was there. I even had a few cheeseburgers in my pocket in case we crossed paths. I had some advice for combatting shirt allergies as well. I headed towards the UFO through camper village. Even through the camper village one could find little vendors and everyone toking up. All the people were super friendly. And then they got even friendlier. I stay incognito at these type of functions, but my sidekick DarkCloud blew my cover. She told one of the mini-vendors in camper village who I was, and who I’m writing for. Before I could even say “Don’t do that.” there was a whirlwind of cannabis. Joints, bowls, bongs, and rigs were ablaze. The last thing I remember were Girlscout Cookie Dabs, a Chocolate Diesel cone, and eating the cheeseburgers in my pocket. Oh man, I had eaten the bait. Curses! Foiled again! I am my own worst enemy. Oh, well. I’ll get you next time Patrick Roach!

We made our way to the UFO landing. It was like the background to Close Encounters with techno music. Even from the road it was lighting up the skies and the forest surrounding it. Suddenly I realized it wasn’t forest at all, but a corn field. I was suddenly over stimulated and having thoughts of Children of the Corn. I headed back toward vendor village. It was mentally safer there. 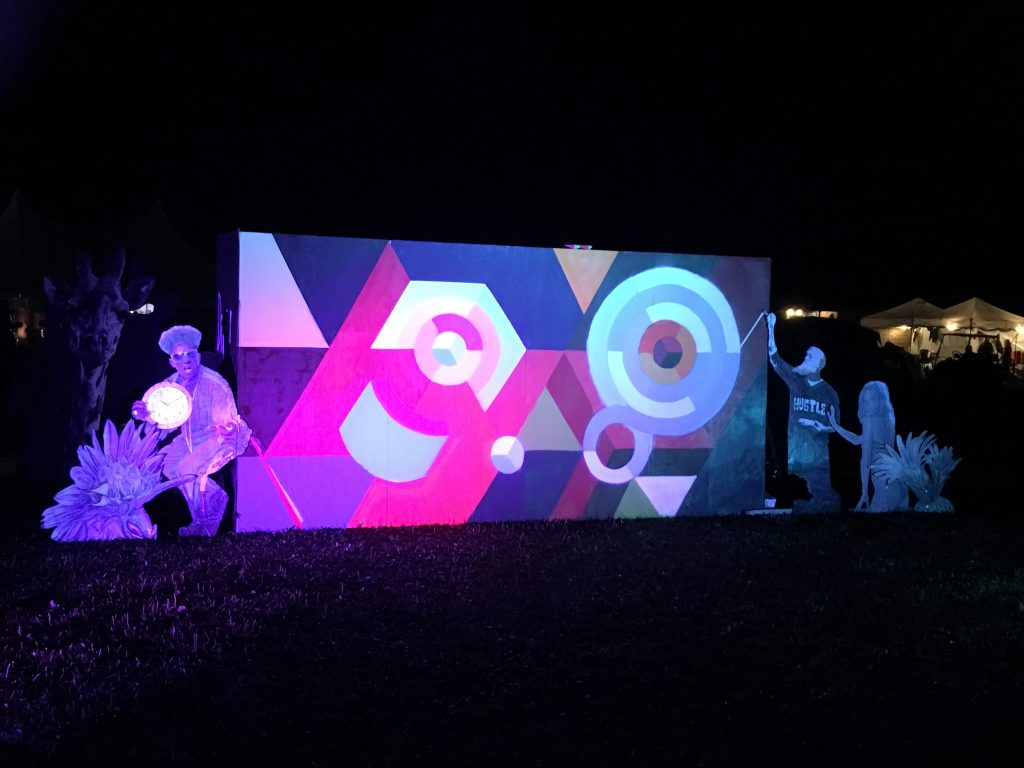 As I approached, i noticed much of the art that was being worked on earlier that day was now completed or in the process of being completed, and glowing in the dark. 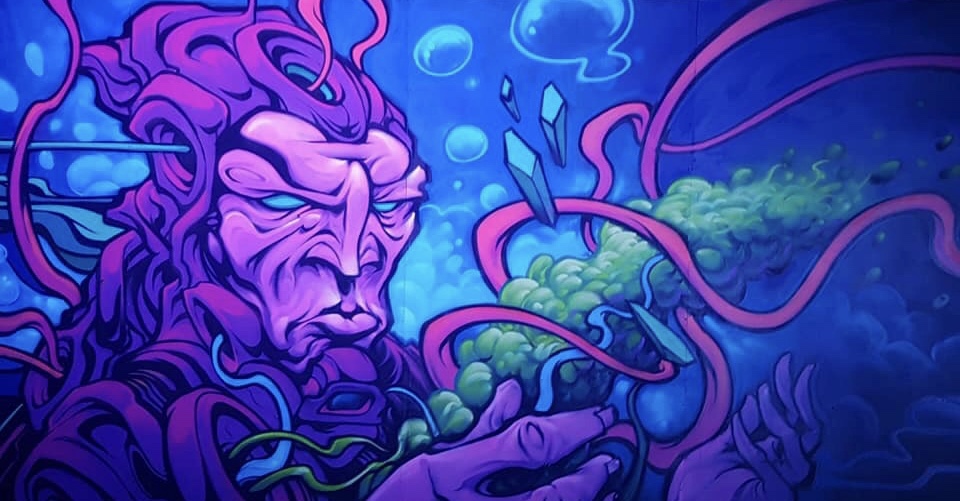 I had returned to The Purple Moosehead to see if anything was brewing over there. As we made our way around to all the vendors my sidekick DarkCloud continued to blow my cover from table to table. But it didn’t turn out to be a bad thing. It ended up really fun. I was going to ride it out. Show me your goods! 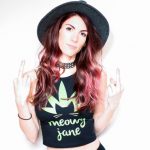 As I strolled through the vendors of The Purple MooseHead. This cat definitely get’s “Best In show”. Great presentation.  MeowyJane. Rock on. Great setup, with illuminated display jars. My cover had been blown again, so she was showing me all the flowers. Opening the jars, checking stuff out… They had really Really REALLY nice products. Top TOP shelf products with fine lab numbers. Here I am going down their line talking about the strains… SpaceCandy 22%, Blackwater OG 20.1%, KeyLime Pie 28.1%… Oooo, Can I have a sticker? Then I happen to notice we were all drink a Juicy-J’s Medicated Lemonade and were commenting on how much we were enjoying them and the lady tells me she put tequila in her’s. She had become my new favorite SuperHero. Then I saw it! WeddingCake at 35.8%. Boom! 💥 And a few others… 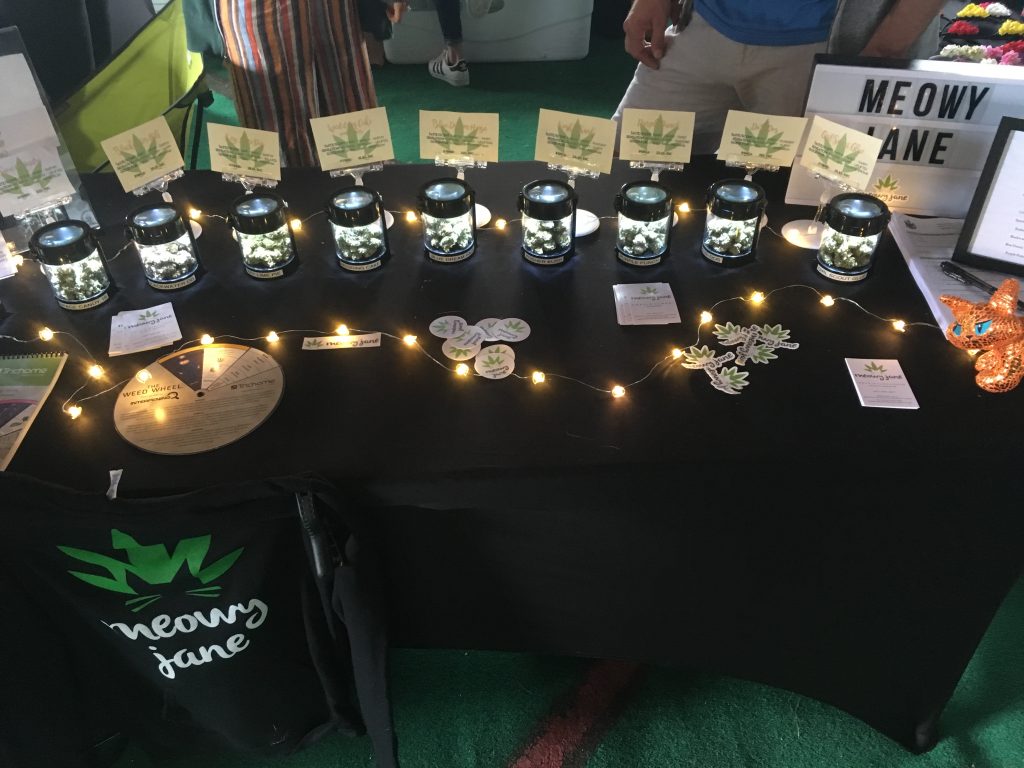 Every vendor wanted to share… I had become completely melted in the middle of the barn. Then there were the dabs and vape pens. It was flowing like Pooh Bear’s honey pot. Everyone there was very nice and treated me VERY kindly; along with being very gracious with their wears. Hours went by, some sold out and closed up shop. But everyone was still hanging out. This was great. But I needed some air and another one of those lemonades. Is that music? 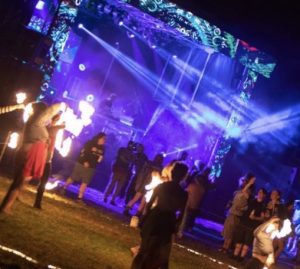 The band played on… I have no idea who they were, didn’t bother to ask. Just took it all in. Good music, surrounded by good people, with good Vibes, and everyone was smoking good Cannabis. After the band wrapped it up, out came a DJ. More lights, music, and people dancing with fire. Dancing with fire? Yes, dancing with fire. Playing with matches and dancing in ashes… 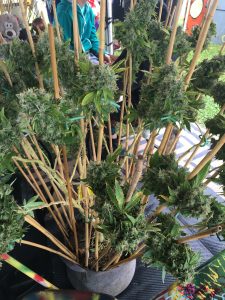 After the long night, I returned the following morning to grab a vape to slurp down at lunch on the way home. I brought coffee and donuts and handed them out to the first people I came across as I hustled over to vendor village. As I walked through, I came across an open grow for display. I must have walked by it dozens of time through the course of my visit, but never noticed it until now. It was confirmed by other patrons that it had been there the whole time… Crazy night, but the flowers looked nice and even the art had evolved. Evolution is cool looking. 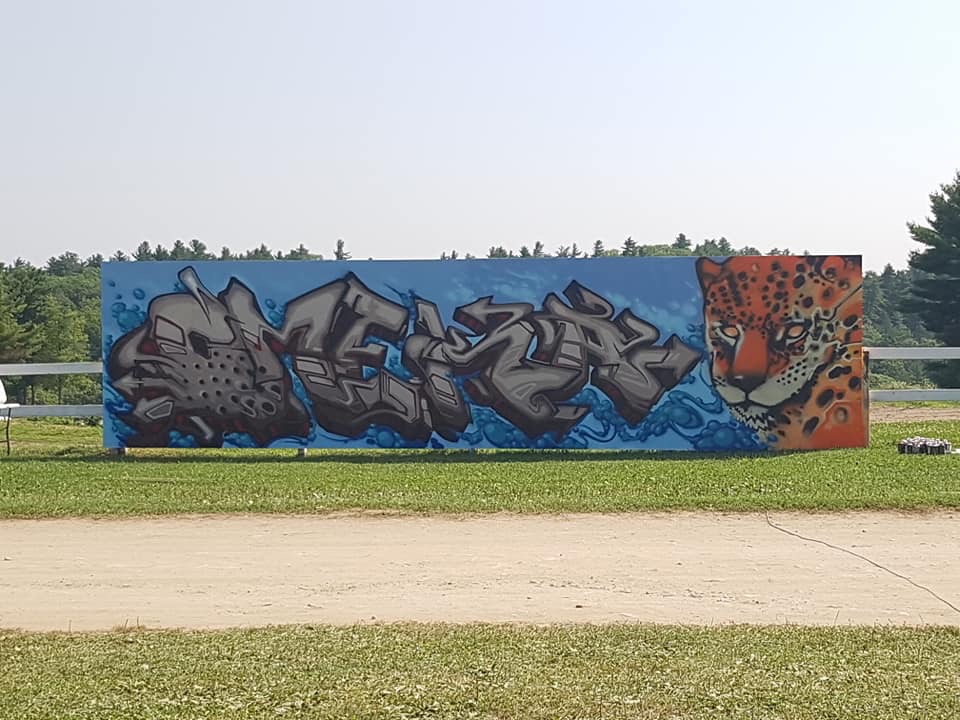 This was a great experience shared with greater people. Truly an environment one can let their hair down in, show their true colors and let their freak flags fly. Between the vendors, bands, seminars, arts, and people, there was never a dull moment at this event. Huge turn out too. Should be even bigger next year. Put this on your calendar and lets make this as big as Burning Man. Burning Man is one big fire when this is a whole bunch of little ones. AND I vote for a ferris wheel.

Medical Marijuana to be Grown in White House Garden this Year…