Mila Janssen, better known as the Hash Queen, traveled in India, Afghanistan and Pakistan in the ’60’s through the late 80’s. A true aficionado and connoisseur, Mila now has been smoking hash and extracting resin, or “crystals” as she calls it for the last 50 years. She has noted at that moment in time they would take whatever hash they could get their hands on, and the product often came from Lebanon etc. Decades have passed, she has seen it all and done it all. As cannabis and concentrates gain popularity, Mila’s legend has grown. During this interview with the Hash Queen we get to hear about her introduction to the art of hashish, as well we discuss her upcoming projects she’s working on this summer.

It’s no secret that you’ve lived up to your nickname “The Hash Queen” but we’d like to hear it from you first, how has hash hashish benefited your life personally and when did you first experience it? 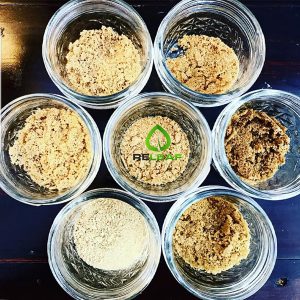 My first experience of smoking hash was in 1964, I rolled on the ground with laughter, loved it immediately and it is my drug of choice. I realized it is also my medicine long ago, hash keeps me healthy and sane in all the madness of what life brings you.

I even started Pollinator Company in 1994 because of hash. When I returned from India in 1988 there was no good hash in any of the coffee shops in Amsterdam, well, I admit I was spoiled with the best Afghani. I had learned the simple technique of separating the crystals over a screen which I did for a couple of years till I realized that the clothes in my drier made the same tumbling action as I did by hand over a screen. The Pollinator was born. The very first mechanical sifting system ever. I started producing these machines thinking that others loved hash too and would be happy to make some.

The first time I showed it was at CIA (Cannabis in Amsterdam, now known for Hoodlamb and THSeeds) where Rob Clarke unveiled the machine. A great night and we tried out the wooden Pollinator and made some great hash that night in the company of Jack Herer, Soma, Ben Dronkers from Sensi Seeds, David Watson, Wernard from Positronis etc.

You are a mentor and inspiration to all of us concentrate enthusiasts, what do you think about the advancements that have been made over the last half decade with the techniques and methodology behind the art of hashish?

Making hash, or concentrates as you call it nowadays has certainly come a very long way since those days when many coffee shops considered our dry sift too strong to smoke during the day.

Finally the Dampkring and Katsu started to put it on their menu. Since then I was the first to come with bags, the Ice-O-Lator bags and later the washing machine to make life easier, after all, a washing machine was invented to get our dirty socks clean, so to wash crystals off marijuana is easy. Vital is the freezing water, the crystals get hard as glass and just end up in the water. Sift the water in screen bags and there are your crystals, looking like caviar, pure trichomes with no added plant material.

Nowadays so many ways have been developed, there was BHO which was the next great jump. I never liked that so much though nowadays the taste is much better, now it gets cleaned but I’m not in great favor of chemicals. I eat organic food, so why smoke my dear plant prepared with chemicals. And not being very technical I must admit I don’t even know how to make sauce. Or how any of these new and expensive machines work.

I can appreciate rosin and really loved what I made in LA last year, where we put fresh frozen in the Pollinator and then made rosin out of that, what a beautiful product that was!!! What a great smoke!!!!

You’ve traveled the world, too many countries to count. If you could have one              common goal for cannabis on this earth what would it be and why?

I would love for cannabis to get normalized. Just treated like a normal product, available to all. Over 18 maybe. But I say this because when the seed companies were developing their strains they thought it important to have a high THC count and only the tiniest bit of CBD. And this can cause an imbalance, and it seems that especially young people can get problems. But I believe the world would be a better place if more people smoked.

As your journey continues, you add to your life story daily and are really a fascinating person. For any of our readers just getting familiar with The Hash Queen, how can they find out more about you, try your hash or follow your events?

In July of this year my book will be coming out. ‘Mila, how I became the Hash Queen’. Mama Editions from Paris will be publishing the book. I will launch it book on 07 July at the Hitman Coffee shop in LA and will have a place at Chalice Festival to sell the book. If people are interested to preorder the book write milajansensbook@gmail.com.If they are interested to be informed about future Dab-A-Doo’s they should write dab.a.doo.event@gmail.com, and they will hear when and where the next one might be, Colombia, Mexico and Michigan are definitely happening this year.

Pioneering and adapting to the change, it’s great to see Mila being a massive success all over. From founding and organizing the infamous Dab-A-Doo events, which is a prestigious hash competition held at locations across the world, too creating documentaries about her life and writing books. Just recently she was nominated and won an award for High Times top 100 most influential people in cannabis, a much deserved accolade. To stay up to date with Mila follow her on instagram @hashqueenextract.