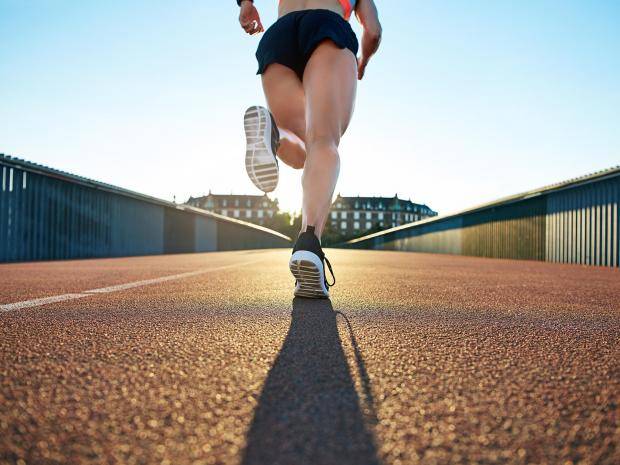 For an increasing number of athletes, two of the commonwealth’s signature features — the Boston Marathon and legal marijuana — make for a brilliant combination. Athletics and pot might seem like an odd mix for the uninitiated, but it’s common enough to have generated a term, “cannathlete,” which you can find trending on twitter.  And while it’s impossible to say just how common the practice is, high achieving cannathletes are coming out of the “cannabis closet.”  MMAfighter Nate Diaz openly vaped a cannabis concentrate during a press conference right after a fight, and endorsed its benefits for recuperation.  And in the ultramarathon world, the very pro-cannabis Avery Collins won the 100 mile “HURT” race in Hawaii, running over mountains and through a false missile threat alarm to finish more than two hours ahead of his nearest competitor.

I didn’t have to look very hard to find someone who had run the Boston Marathon under the influence of cannabis. Rebecca Kelley says that adding cannabis to her training helped her qualify for the Boston marathon in 2016. Kelley is both a serious runner and the content editor for Leafly, the biggest cannabis information website in the world. But she’d never combined cannabis and running before her training to qualify for Boston. “I don’t necessarily consider cannabis a performance enhancing drug in terms of like, ‘Oh, I could have never qualified without it,’” she said. “I do think it really helps me with some of the motivation aspects and the post workout care regimen.”

When it came time to race in Boston in 2016, she arrived in town with a stomach bug from an overseas trip, and a dose of cannabis through an edible helped her get past her nausea. But, like many runners, she began to falter on Heartbreak Hill. A group of college guys noticed her Leafly shirt. “They look at me, and then they just start screaming ‘Leafly!’ and they leaned over the barrier to give me these crazy high fives and that was the ultimate boost for me at that stage of the race.”

“And I … cruised down that hill and ran back down towards the finish line with this big stupid grin,” she added.

Greg Gerdeman, who has studied the pharmacology of cannabis for more than 20 years says its use “for an endurance sport is a real natural fit.” It can also provide relief for the nausea that can hit athletes after a long run. “Cannabis is a good anti-inflammatory,” he added. “It has analgesic properties, pain inhibiting effects.”

Some runners say it helps them with their focus and rhythm, or just makes a race more interesting. As more athletes turn to cannabis for a variety of reasons, they look to different strains of marijuana for those desired effects. Sativa strains—with names like “AK-47” or “Ghost Train Haze” — are credited with providing a mental and physical boost.

“I think of it like that little Popeye spinach can jolt,” says Leafly’s Kelley, “where it gives you just that little bit of motivation takes that edge off in terms of feeling like, ‘I don’t think I’m ever going to get through this.’”

On the other end of the spectrum are the indica strains, with names like “Hindu Kush,” and “Grandaddy Purple.” The indicas tend to be associated with a more relaxed, sleepy-body feeling. Kelley turns to the indicas at the end of a brutal day of training. “It’s like a tranquilizer dart to the neck, basically, where I get really relaxed, and really sleepy and you can kind of just ease off into sleep and have a nice night’s rest after a really punishing day on your feet and in those run shoes.”

But what about the rules of the sport — not to mention state and federal law?

The Boston Marathon goes by the World Anti Doping Association rules, which do list marijuana as a banned substance. Athletes can be tested for the residual THC that stays in the body after marijuana use. But there’s some grey area — in 2013, the association raised the amount of THC it takes to test positive. So if you avoid taking it on the day of the race, you potentially could get away with using cannabis during training.

In Massachusetts, until the recreational dispensaries open, the only legal shops serve exclusively medical marijuana patients, like the dispensaries run by New England Treatment Access, NETA. Mikayla Bell, NETA’s community relations manager, is running the marathon this year, which will pass close to NETA’s Brookline dispensary. Runners tend to avoid smoking to protect their lungs, and Bell says better options are edibles like brownies or cookies, or vaping raw marijuana or concentrates. There are also faster acting tinctures: “Some runners have reported that it’s nice that they can take a couple drops, a couple milligrams and are able to feel a little soothing sensation after their run,” said Bell, who personally likes the topical lotions. They “really seem to help for me after the runs,” she said. “Rubbing them on my knees [and] my legs, you get that instant relief.”

The average age of the patients at NETA is 45, and it doesn’t hurt that the dispensary is in the old Brookline bank building, with its ornate dome and original woodwork, about a block from the marathon route. NETA employees will be out supporting the runners — and perhaps looking for support. “I think that more runners should be a little more vocal about their cannabis use,” Bell said. “I certainly don’t mind talking about mine. It’s certainly helped me.”

NETA is applying for a license to sell recreational marijuana, so next year, stopping in for a boost of Ghost Train Haze might be an option for every runner.