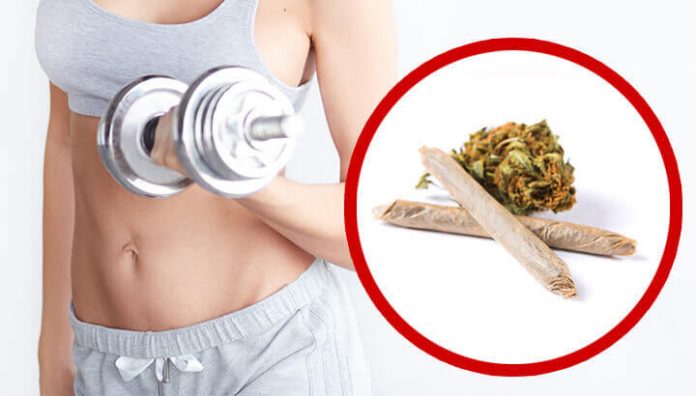 How Cannabis Is Fueling a New Fitness Movement

Recreational marijuana use has now been legal in California for six months and counting. On the surface, you’d never know that anything has changed. Since the passing of Prop. 64 in November, there have not been red-eyed, burnout bohemians strewn across the lawns of Griffith Park, nor masses of wasted youth in irreversible states of hysteria. Instead, on a hot Saturday afternoon in May, a group of lithe twenty-somethings clad in the kind of spandex that doesn’t leave much room for snacking gathered on a rooftop in the shadow of the Hollywood hills to practice yoga, and get high.

“Let’s all take a puff,” said Equinox yoga instructor Derek Beres to the students at the beginning of class. In unison, they inhaled from vape pens by Bloom Farms, a San Francisco–based medical marijuana company that also sells pre-rolled joints, and settled into mountain pose.

Those who chose to opt out of vaping THC could enjoy the anxiety-quelling benefits of CBD—the non-psychoactive compound in the cannabis plant that has been found to reduce epileptic seizures—baked into “cookies” made of clusters of organic seeds sweetened with dried fruit and cinnamon for the occasion.

After bites or drags of hybrid oil, students calmly and intently moved through warriors one and two, downward dogs, and pigeon poses to the sounds of ambient reggae. The hour-long class was short, and the breeze nice. Over post-savasana, CBD-infused cocktails, relaxed attendees traded protein tips and made plans for their next group hikes.

In the media, stoners have never held a strong reputation as fitness buffs, but leave it to the kale-juice swilling, kettlebell-swinging wellness worshipers of the West to change that. Medicated yoga classes, retreats, and athletic events like the 420 Games are popping up all over the coast, as well as in Colorado and Washington, D.C. Earlier this year, San Francisco opened its first “cannabis gym,” Power Plant Fitness, which encourages members to get high while raising their heart rates. So why the sudden marriage of fitness and weed? “It’s been happening for a long time,” says the Bloom Farms founder and former Wall Street trader Mike Ray. “Yoga and cannabis have gone together for as long as yoga and cannabis have been around.” It’s true; many believers quote the Vedas when saying the joyful “herb” in sacred Hindu texts and yoga sutras is actually cannabis.

But modern-day researchers and entrepreneurs are only starting to consider the potential gains of smoking while sweating. A systematic analysis published this year found that only 15 studies have been published worldwide on the relationship between cannabis and athletic performance. Most studies found no evidence that marijuana can help or hinder a workout, while others showed negative impacts, explains Dr. Jeff Chen, codirector of UCLA’s Cannabinoid Affinity Group. The problem, Chen says, lies in the lack of research in the still-classified Schedule 1 drug (alongside heroin and ecstasy). “The physiological data is muddled,” he says. “The dosages used in these studies were inconsistent, as were the methodologies for consumption. Some [subjects] smoked cannabis, and some ate pure THC. It’s like comparing apples to oranges.”

Theoretically speaking, Chen admits there could be merit to the reefer madness for those without preexisting heart conditions. “Heart rates can increase after smoking cannabis, which could conceivably make [people] hit their maximum heart rates at a reduced workload,” he says. And while plenty of anecdotal evidence proves that cannabis can also help ease the anxiety and pain of a strenuous workout—remember the ultra-marathoners who made headlines when it was discovered that many of them get high before they run 30-plus miles—overconsumption can lead to the blunting of pain and the potential “pulling of muscles or joints,” he says of the act of using while exercising.

As for those after-class puffs and CBD-infused drinks? “[Using cannabis] almost mimics the reaction our bodies have [naturally after a workout] to reduce pain, reduce inflammation, and boost appetite,” Chen says of our internal endocannabinoid response to physical exertion. But at this point, again, any evidence is anecdotal at best, and entirely subjective, he says. “Everyone’s body is different, their usage of cannabis is different, and their response to it is different. Because of the research restrictions, scientists are left in the dark.”

Though the legalization of medical marijuana in 29 states including California is helping to create more room for cannabis research, studies surrounding its effects on athletic performance will likely rank lower on the proverbial list in the near future, as doctors first continue to explore its potential for conditions like epilepsy, and consider its role as an alternative to addictive anti-anxiety drugs, like Xanax, as well as opioids for pain management. For now, Californians may inhale and exhale as they see fit.