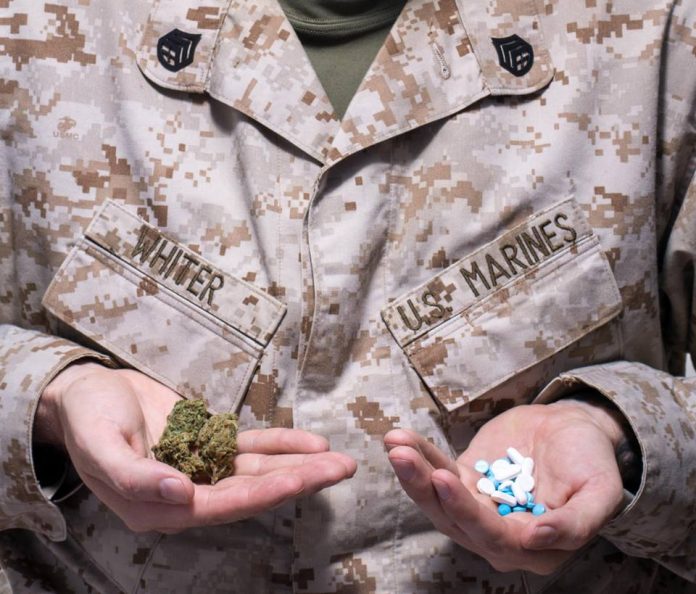 by Evan Halper and Lauren Rosenblatt

The Trump administration’s attack on legal marijuana, already stymied by large states determined not to roll back the clock, is increasingly confronting an even more politically potent adversary: military veterans.

Frustrated by federal laws restricting their access to a drug many already rely on to help treat post-traumatic stress disorder, chronic pain and opioid addiction, veterans have become an influential lobbying force in the marijuana debate after sitting on the sidelines for years.

The 2 million-member American Legion last spring got involved in a big way by launching a campaign to reduce marijuana restrictions that, it says, hurt veterans and may aggravate a suicide epidemic.

The move reflects the changing politics of marijuana and of a conservative, century-old veterans service organization facing new challenges as its membership grows with those who served in Iraq and Afghanistan.

“We were hearing these compelling stories from veterans about how cannabis has made their lives better,” said Joseph Plenzler, a spokesman for the American Legion. “That they were able to use it to get off a whole cocktail of drugs prescribed by VA doctors, that it is helping with night terrors, or giving them relief from chronic pain.”

At the same time, some patients complained that Veterans Affairs doctors refused to offer any advice for using medical marijuana yet recorded who was using it, raising fears that such information might be used to punish former service members or strip their benefits.

The legion is calling for marijuana to be reclassified federally from a drug that has no medical benefit and is more dangerous than cocaine to be included in the same category as legal prescription painkillers. And that has caught the attention of lawmakers.

A measure the legion supports, which would permit VA doctors to give their patients the sign-off they need to access medical marijuana in states where it is legal, was approved by a key Senate budget committee this month on a 24-7 vote, with nine Republicans voting in favor. The measure is among the veterans-related marijuana legislation gaining traction at an otherwise challenging time in Washington for pot advocates.

“This is one marijuana issue a lot of Republicans are interested in,” said Sarah Trumble, deputy director of social policy and politics at Third Way, a centrist think tank that advocates easing federal restrictions on cannabis. “It’s the baseball and apple pie of marijuana.”

The legion’s involvement has helped lure lawmakers to the debate, such as Republican Rep. Matt Gaetz of Florida, who coauthored a bill that would recategorize marijuana as a drug with therapeutic value. Longtime marijuana proponent Rep. Dana Rohrabacher, an Orange County Republican, constantly raises the issue of veterans on the House floor.

“It is a travesty,” he said in a recent speech. “They are given opiates instead of maybe something they can derive from marijuana…. And our veterans end up killing themselves because now they are addicted to an opiate.”

Such thinking is driven by a 2015 National Bureau of Economic Research white paper that found opioid overdose deaths are 16% lower in states where medical marijuana is legal.

It has put VA leadership in an awkward spot. Soon after the legion began its push in May, VA Secretary David Shulkin acknowledged evidence is emerging that cannabis may be helpful in treating veterans, and it is something the agency intends to examine.

But Shulkin is bumping up against powerful forces in the Trump administration tacking hard in the reverse direction on pot. Atty. Gen. Jeff Sessions is pressing Congress not to renew a rider that prohibits federal law enforcement from targeting medical marijuana operations in states where they are legal. In a letter to congressional leaders, he emphasized that marijuana has no accepted medical use under federal law.

The increased profile of veterans comes years into an effort by researchers to conduct a federally approved study of the potential benefit of using pot to treat post-traumatic stress disorder. Federal regulators had long refused to approve such a study, in large part because marijuana was determined by their agencies to have no medical use.

A study was cleared in April 2016, but researchers find themselves confronting obstacles. They are permitted, for example, to use marijuana grown only at a federal research facility in Mississippi, which lacks the concentration of active ingredients available in the products sold in dispensaries.

“It’s been a seven-year battle,” said Dr. Sue Sisley, principal investigator for the study, which is being conducted by the California-based Multidisciplinary Assn. for Psychedelic Studies. “There is so much government red tape surrounding cannabis research.”

Even in states where marijuana is easily available, veterans find themselves self-treating complicated illnesses, often with little more guidance than what the “budtender” offers up at the point of sale.

“You have patients who are not fully informed of the risks and benefits cannabis poses, and you have practitioners not informed about what their patients are doing,” said Steve D’Angelo, executive director of Harborside Health Center in Oakland, one of the country’s largest dispensaries. “It is a recipe for medical mistakes.”

When Dan Schmink returned from the Army ailing from chronic back pain, broken ribs and psychological issues, the Arizonan said he discovered marijuana could bring him some relief. He tried to get guidance from his VA doctors, but it just led to warnings about illegal drug abuse. “For the most part I never talk about it because you don’t know who will flag,” Schmink said.

He dove into Google Scholar to figure out what he could on his own. It was rough going at times. He recalled “full-blown panic attacks” while self-medicating.

Now he shares his findings with other veterans through a group he founded called Southwest Healing Group. But what he’d really like to see is veterans able to consult their VA doctors about their use.

In states where the laws are more restrictive, veterans face higher barriers.

Therese Carrozzino left the Army in 2013 addicted to Percocet. The 26-year-old New Jersey resident said her military doctors left her feeling she had little choice but to take the painkillers. “If I didn’t take my medications, they would’ve kicked me out and I wouldn’t have had any benefits,” she said. “So I took the medication as prescribed and ended up becoming addicted.”

Carrozzino finally turned to medical marijuana a few years ago as she transitioned off the prescription drugs. “I made it through with the help of smoking joints and just trying to stay alive,” she said.

New Jersey Gov. Chris Christie signed a new law in September to enable veterans to access medical marijuana, which is highly restricted in the state. Carrozzino applied for her medical marijuana card two months ago, at a cost of hundreds of dollars, an amount she did not have to spare.

She said she has yet to receive the card.