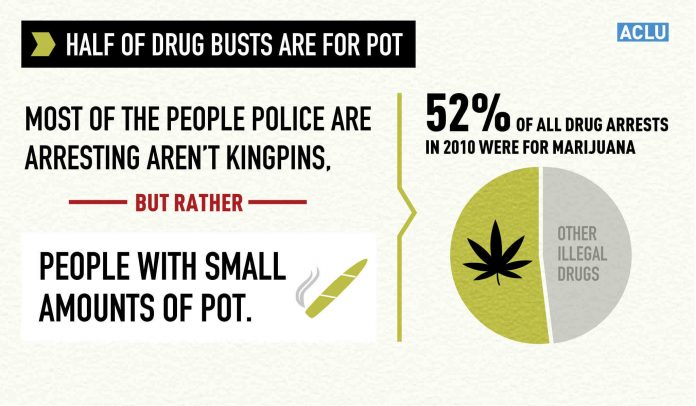 More people were arrested for possessing small amounts of marijuanathan committing violent crimes in 2015, and a disproportionate number were African-American according a new study, The New York Times reports.

The study, released Wednesday by the American Civil Liberties Union and Human Rights Watch, found that law enforcement agencies made 574,641 arrests for possession of small amounts of pot intended for personal use, while 505,681 arrests were made for all violent crimes, including murder, rape and serious assault. And while violent crime arrests have dropped 36 percent from 1995 to 2015, the number of arrests for all drug possessions has increased 13 percent.

The study also found that black adults were more than four times as likely to be arrested for marijuana possession than white adults in 39 states that provided sufficient data. More so, black adults were two-and-a-half times as likely to be arrested for possession of small amounts of any illicit drug, even though white adults were more likely to use such substances. The disparity in arrest rates is even greater in states like Iowa, Montana and Vermont, which have relatively small black populations.

Not only do the initial arrests clog up the court system, but those arrested are often burdened with fees and fines, which, if they can’t pay, frequently lead to further warrants and incarcerations. Making matters worse, those arrested often struggle to find work after their release due to their criminal records.

Many criminologists point to problematic police practices as one major reason for the vast discrepancy in arrest rates. For instance, officers policing areas with high crime rates are likely to arrest citizens for minor offenses, further driving up crime statistics and thus increasing police presence.

The hyper-vigilant approach to policing marijuana can also have disastrous consequences. Last month, Keith Lamont Scott was killed by police in North Carolina following an incident that began, in part, because the police said Scott was smoking marijuana.

“It is selective enforcement, and the example I like to use is that you have all sorts of drug use inside elite college dorms, but you don’t see the police busting through doors,” said Inimai M. Chettiar, director of the Justice Program at New York University’s Brennan Center for Justice.