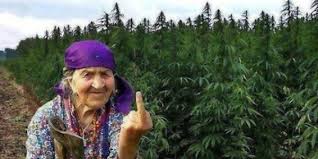 Police hit the home by helicopter — to take a plant used for an elderly woman’s arthritis.

If you were trying to come up with a headline that perfectly demonstrated why so many people have turned against keeping marijuana illegal, you probably couldn’t do better than this real headline from the Daily Hampshire Gazette in Massachusetts: “Raid! National Guard, State Police descend on 81-year-old’s property to seize single pot plant.”

The story is just as absurd as it sounds. On September 21, the Massachusetts National Guard and State Police descended on 81-year-old Margaret Holcomb’s home in Amherst using a military-style helicopter to chop down a single marijuana plant that they claim was in “plain view.” The raid was part of a broader operation in which police seized 44 plants in Massachusetts homes, with none of the property owners charged with anything — just their plants taken and destroyed.

Holcomb said she was growing the plant for medical purposes — to ease her arthritis and glaucoma and help her sleep at night. She does not, however, have a medical marijuana card authorizing her to grow pot, because she reportedly worries about the hurdles involved in getting a doctor to sign off on it.

Given those facts, it’s safe to say the raid did absolutely nothing for public safety. Stopping an elderly woman from taking a relatively harmless drug for medical purposes does no one any good whatsoever. As Holcomb put it, the raid won’t even stop her from getting marijuana; she said she’ll likely just grow another plant.

Yet police wasted time and money deploying a helicopter — likely paid for in part through federal funds, according to the Daily Hampshire Gazette — to seize not just Holcomb’s sole marijuana plant but dozens of others across the state on that one day. They argue the actions were necessary because the plants were in plain view and therefore illegal, even though Holcomb’s pot plant was hidden away in her fenced-off backyard behind a raspberry patch. (It was likely detected with a thermal imager.)

There’s a good chance that after November, this wouldn’t be something police would do — Massachusetts is among five states that will vote on whether to fully legalize marijuana later this year.

The raid exemplifies why these votes are happening. According to a 2015 Pew Research Center survey, 53 percent of Americans support legalization, citing its medicinal benefits, its relatively low risk compared with other drugs, the benefits of regulation and tax revenue, and the current financial costs of prohibition. The raid touched on all of these issues, from seizing a relatively harmless drug used as medicine to deploying an expensive helicopter to raid an 81-year-old woman’s home.