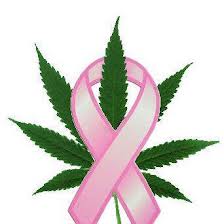 Could cannabis cure breast cancer? Such a proposition may sound farfetched, but the few studies available indicate that while cannabis has not been shown to specifically kill cancer cells, cannabis use could indirectly assist with the many symptoms of cancer and combat the effects of chemotherapy. Cannabis has been used for years to treat symptoms and ailments associated with cancer, despite its Schedule I classification within the Controlled Substances Act.

Breast cancer is the second leading cause of cancer-related deaths in women within the United States. Researchers are scrambling to find treatments for breast cancer as it becomes resistant to already established therapies. As it turns out, a recent study, published in 2011, concluded that CBD has been found to induce the process of programmed cell death in breast cancer cells.[1] CBD itself is not killing the breast cancer cells, but instead activates autophagy.

The American Association of Cancer Research indicates that, “Recent studies have shown that cannabinoids also induce autophagic cell death,” lending hope that there may be other cannabinoids besides CBD that could have similar medicinal effects. Autophagy is a natural process within the body that deals with the destruction of cells. Essentially, CBD induces the process whereby the body would destroy unnecessary or dysfunctional cells in order for new, healthy cells to have the ability to form. The research concluded in the results of their study, “The desirability of CBD as an anticancer agent, because they suggest that CBD preferentially kills breast cancer cells, while minimizing damage to normal breast tissue.” Can you imagine? A substance with the ability to target compromised cells.

Of the 483 known compounds within the cannabis plant, at least 100 of those have been identified as cannabinoids. A cannabinoid interacts with cannabinoid receptors, which are located in cells throughout the body. The two main cannabinoids receiving the most notoriety are delta-9-tetrahydrocannabinol (THC), the compound that produces a ‘high’ in users, and cannabidiol (CBD), the non-psychoactive cannabinoid often used by medical patients. Cannabinoids are the active chemicals in cannabis that cause drug-like effects throughout the body. The National Cancer Institute states that cannabis, “May be useful in treating the side effects of cancer and cancer treatment.” Cannabinoids can, among other things, block cell growth, prevent the growth of blood vessels—which supply tumors—and have antiviral properties.

Both THC and CBD can be used to treat a variety of cancer-related ailments. While CBD is generally classified as more medicinal than THC, the application of THC cannot be underscored in regards to cancer. THC may not be as directly active in ridding the body of cancer as CBD, but it can still play a role in its treatment. THC can be helpful in relieving pain and nausea; reducing inflammation; and can even act as an antioxidant (American Cancer Society). Not only that, but smoked cannabis can also be helpful in treating neuropathic pain and can help improve food intake.

Besides all of the stated conditions that cannabis could treat, a factor not often given consideration is the relative absence of side effects attributed to cannabis use. While some drugs may contain warnings such as, “May cause nausea, vomiting, constipation,” there are other drugs that can lead to seizure, stroke, internal bleeding or even death. In contrast, the side effects of cannabis are minimal, including lower blood pressure, bloodshot eyes and muscle relaxation; with the most extreme side effects being dizziness, paranoia, or possibly auditory or visual hallucinations. Though any negative side effects are undesirable, the side effects attributed to cannabis are not physically harmful, long-lasting or detrimental to one’s health.

While there is certainly not an overwhelming amount of data supporting the medicinal uses of cannabis in treating breast cancer, the same statement could be made in regards to any medical condition. The DEA’s failure to declassify or even reclassify cannabis underscores what many already know. In continuing to ignore the potential medicinal benefits of cannabis, patients are being denied a natural compound that could serve as a panacea.

But let’s not place all of the blame on the DEA. The U.S. Food and Drug Administration also states that they have not approved cannabis or cannabinoids for use as a cancer treatment. Despite its Schedule I classification, there have been two drugs developed based on marijuana compounds that have been approved by the FDA for the treatment of chemotherapy-related nausea and vomiting: dronabinol and nabilone. Of the clinical trials conducted thus far, results have indicated that both dronabinol and nabilone work as well as, if not better than other FDA-approved drugs used to relieve nausea and vomiting. Still, the FDA maintains that there is no indication that marijuana may be a safe and effective drug. The irony cannot be lost that while the FDA continues to deny the medicinal benefits of cannabis, they already have two approved drugs on the market containing cannabis compounds.

Cannabis has been used for years to treat chronic pain, seizures, depression, PTSD and a whole slew of other conditions. With recent data suggesting that cannabis could play a role in fighting breast cancer, there needs to be greater recognition of the potential for cannabis to be effective in treating other life-threatening illnesses. At some point consumers must decide to take action. Calls for more research fall on deaf ears. Instead of waiting on a call that the DEA is never going to make, states that have passed recreational and medical laws should pursue proposals and funding for research.