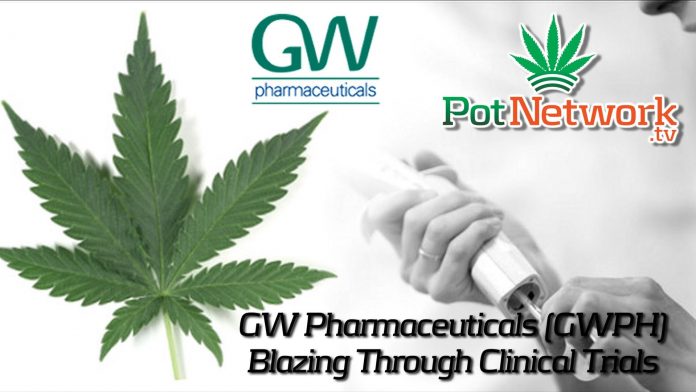 An experimental cannabis-derived drug has successfully treated children with severe epilepsy in a third late-stage clinical trial, sending shares in Britain’s GW Pharmaceuticals to a record high on Monday.

GW, which was founded in 1998 to capitalize on the medical benefits of cannabis, said it now expected to submit a marketing application for Epidiolex to the U.S. Food and Drug Administration in the first half of 2017.

Its multiple sclerosis treatment Sativex, which is sprayed under the tongue, is already distributed by marketing partners in more than 20 countries, but not in the United States.

If Epidiolex is approved, it could become the first U.S.-approved prescription to be extracted from cannabis. It contains cannabidiol, a component of cannabis that does not make people high, and is administered as a child-friendly syrup.

Its commercial potential has attracted possible acquirers of GW, according to people familiar with the matter. Reuters reported earlier this month that GW was working with an investment bank after other drugmakers approached it to express interest in an acquisition.

GW has strong British roots, with a government license to grow cannabis plants for its medicines in southern England. In 2013 it also listed its shares on Nasdaq.

Investors view Epidiolex as critical to GW’s future and hopes have been building following positive feedback from “compassionate access” programs involving hundreds of American children. Its Phase III trials, however, are make-or-break.

In the latest trial, both tested doses of Epidiolex were found to have induced a statistically significant improvement in reducing seizures in patients with Lennox-Gastaut syndrome (LGS), GW said.

LGS is a disease that is characterized by seizures, impaired intellectual functioning, developmental delays and behavioral disturbances.

The drug had already succeeded in another late-stage study in LGS and GW has also announced positive results from a late-stage study on patients with Dravet syndrome, another severe form of epilepsy.

The company’s shares rose as much as 16 percent to hit a record high of 811 pence on the London Stock Exchange. They were trading 10 percent higher at 770p by 1255 GMT.