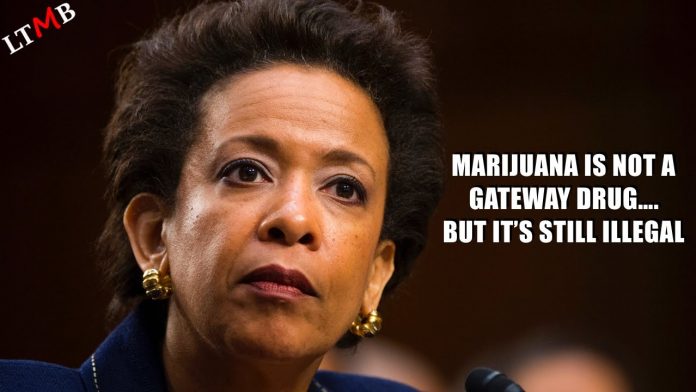 U.S. Attorney General Admits Marijuana Is Not a Gateway Drug

One of the most popular arguments against the legalization of marijuana is that pot is a “gateway” drug with the potential to turn the great American populous into a nation of dope fiends. But today the country’s leading law enforcement official denounced this common misconception by admitting that the consumption of marijuana does not lead to the use of harder drugs.

As part of what President Obama has declared National Prescription Opioid and Heroin Epidemic Awareness Week, U.S Attorney General Loretta Lynch appeared at town hall meeting this morning in Richmond, Kentucky to discuss the dangers of opioid abuse with a group of teens.

In her opening statement, Lynch was adamant that the leading culprit behind Kentucky’s heroin epidemic was the use of prescription drugs.

“When you look at someone that, for example, has a heroin problem, it very often started with a prescription drug problem. Something totally legal. Something in every medicine cabinet. Something you can have prescribed to you in good faith by a doctor,” Lynch said before taking questions from the audience.

It did not take long before the discussion turned to the issue of marijuana.

Tyler Crafton, a student at Madison Central High School, took the opportunity to ask Lynch whether she thought the recreational use of marijuana among high school kids would lead to opioid abuse.

Shockingly, Lynch, the top dog at the U.S. Department of Justice, did provide the young man with a response straight out of the federal government’s propaganda handbook.

“There a lot of discussion about marijuana these days. Some states are making it legal, people are looking into medical uses for it, and I understand that it still is as common as almost anything,” Lynch replied. “When we talk about heroin addiction, we unusually, as we have mentioned, are talking about individuals that started out with a prescription drug problem, and then because they need more and more, they turn to heroin. It isn’t so much that marijuana is the step right before using prescription drugs or opioids.”

But then Lynch followed up with what should be considered one of the most important statements a federal official has made in 2016.

“It’s not as though we are seeing that marijuana is a specific gateway,” she said.

The attorney general’s admission that marijuana is not a gateway drug is fairly consistent with the National Institute on Drug Abuse, which finds“the majority of people who use marijuana do not go on to use other, “harder” substances. Yet many of marijuana’s opposing forces are going up against ballot measure in several states this election season by trying to convince the general public that legal weed will cause the opioid epidemic to spin further out of control.

Interestingly, an investigational report published earlier this week by the Associated Press and the Center for Public Integrity found that lobbyists for the drug makers responsible for the same prescription drugs that Attorney General Lynch says is responsible for the opioid epidemic have spent $880 million legally bribing state representatives and senators to vote against legislation concerning the restricting of opioid use. It stands to reason that these lobbyists are also responsible for getting federal lawmakers to turn a blind eye to marijuana.

Attorney General Lynch will be speaking at more than 250 events this week in support of Prescription Opioid and Heroin Epidemic Awareness Week. It will be interesting to see if she offers additional comments about the safety of marijuana.