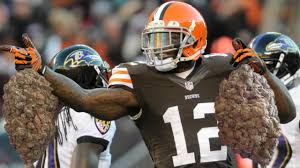 You know that kid in high school who says he does everything better when he’s stoned, even if the only thing he does better while high is eat a bag of Doritos? Eben Britton just might have been that kid.

The former Jaguars and Bears offensive lineman told the New York Post that he not only smoked marijuana before games during his six-year NFL career, he might’ve been even better while baked.

“NFL games I played stoned were some of the best games I ever played. Cannabis cements your surroundings,” he told the paper. “A lot of people say they’re useless when they smoke weed. But hell, I played NFL games [while stoned], dude. My performances were solid and I felt really good after.”

After being selected by Jacksonville in the second round, he missed portions of his next six seasons with knee, shoulder, back, ankle and hamstring injuries. Britton tested positive for Ritalin in his final season, earning him a four-game suspension he never served, because his NFL career was cooked.

In a December 2015 article he penned for Sports Illustrated, Britton explained how a blend of “Adderall by day, weed by night” helped him cope with the pain that comes with playing football.

“Adderall had brought me back to life, Britton wrote. “I was energized. Vibrant. Engaged. Enthused. It erased the pain and allowed me to play. For that, I loved it. And if I needed to take a Ritalin to make it through a day of doing what I loved, that’s what I was going to do.”

Marijuana falls under the league’s substance abuse policy, and the league tests for it, but just once a year between April 20 (coincidence?) and August 9, so players who want to smoke weed can do so during the season without much fear of being suspended. In his conversation with the New York Post, Britton estimated at least half the league smokes pot, “and it could be as high as 75 percent.”

As marijuana has become legal in more and more states across the country, NFL players have pushed for the league to remove weed from its list of banned substances, but at least one former player may not be so comfortable with the idea that mind-altering substances could be beneficial to football.

“The first thing I did when I woke up in the morning was get high, and I would try to stay that way all day long,” former Denver Broncos lineman Matt Lepsis once told Yahoo’s own Frank Schwab of his lifestyle before finding God. “I look back on it, and it was really foolish of me. There were definitely times when I wasn’t even really there. I was physically there, but I was in another place mentally.”

There may very well be medical benefits to marijuana, particularly for NFL players dealing with pain, but perhaps we should reserve some skepticism about the idea that it actually makes you play better. After all, did that kid eating all the Doritos in high school actually play Madden better when he was stoned, or did he just smoke weed and play video games a lot? Either way, I’d like to see the stats.