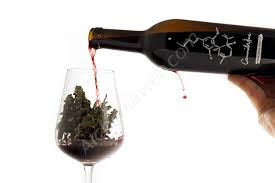 Want to become a weed sommelier? There’s a school for that

Red wine goes with steak. White wine is paired with chicken. So what strain of weed goes with fish?

Organizations such as the Trichome Institute are now offering courses to teach people how to answer that and other important weed-paring questions by better understanding the complexities of the marijuana plant. The the institute has trademarked a term for the skill: “interpening,” for interpreting marijuana terpenes, the organic in the plant’s essential oils.

The idea is that every marijuana variety has a unique flower structure and collection of terpenes that produce very specific scents. By learning how to distinguish those scents, people can figure out what effect different strains of the plant will have on the senses when used—and perhaps what foods it might go best with. The Trichome Institute offers two interpening courses for $324 total, according to the institute’s website (there are group discounts).

Thanks to the handful of US states that have relaxed laws on recreational use of marijuana, the door has opened for all sorts of new pot-related businesses. People are now allowed to use the drug in Washington DC, Alaska, Colorado, and Oregon. And five states in November—Arizona, California, Maine, Massachusetts, and Nevada—will have recreational use of marijuana initiatives on the ballot.

Already Philip Wolf, the founder of Cultivating Spirits, a restaurant in Silverthorne, Colorado, is incorporating knowledge gained from two courses he took at the institute into his gourmet meals, according to Bloomberg. While Wolf said he doesn’t expect weed to replace wine at the dinner table, he told Bloomberg he wouldn’t be surprised if it bit into the sales of hard liquor—something the alcohol industry has beennervous about for months.

Wolf offers two tailored marijuana dining experiences that range from $125 to $249 per person. Included in the least expensive deal: being chauffeured in a limo from your home to various dispensaries and eateries, with between-course cannabis tastings.