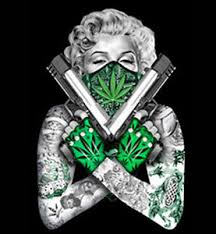 An appeals court ruled last week that a federal law prohibiting medical marijuana cardholders from purchasing guns does not violate their Second Amendment rights, because marijuana has been linked to “irrational or unpredictable behavior.”

The ruling came in the case of a Nevada woman who attempted to purchase a handgun in 2011, but was denied when the gun store owner recognized her as a medical marijuana cardholder, according to court documents. S. Rowan Wilson maintained that she didn’t actually use marijuana, but obtained a card to make a political statement in support of liberalizing marijuana law.

Federal law prohibits gun purchases by an “unlawful user and/or an addict of any controlled substance.” In 2011, the Bureau of Alcohol, Tobacco and Firearms clarified in a letterthat the law applies to marijuana users “regardless of whether [their] State has passed legislation authorizing marijuana use for medicinal purposes.” Though a growing number of states are legalizing it for medical or recreational use, marijuana remains illegal for any purpose under federal law, which considers the drug to have a high potential for abuse and no accepted medical use.

The U.S. Circuit Court of Appeals for the 9th Circuit ruled that the federal law passes muster with the Constitution, as “it is beyond dispute that illegal drug users, including marijuana users, are likely as a consequence of that use to experience altered or impaired mental states that affect their judgment and that can lead to irrational or unpredictable behavior.”

[Legal marijuana is doing what the drug war couldn’t]

The court then concluded that it is reasonable to assume that a medical marijuana cardholder is a marijuana user, and hence reasonable to deny their gun purchase on those grounds.

From a legal standpoint, the nexus between marijuana use and violence was established by the U.S. Court of Appeals for the 4th Circuit in Virginia, in the 2014 case of United States v. Carter. That case cited a number of studies suggesting “a significant link between drug use, including marijuana use, and violence,” according to the 9th Circuit’s summary.

In the words of the 4th Circuit, those studies found that:

Still, the 9th Circuit did suggest causation was part of its decision, saying that irrational behavior can be “a consequence” of marijuana use.

This argument — that substance use increases risky behavior — applies to plenty of other drugs, too, and not just illegal ones. For instance, drug policy researchers Mark Kleiman, Jonathan Caulkins and Angela Hawken have pointed out that tobacco users also are more likely to engage in crime relative to the general population.

“Compared with nonsmokers, cigarette smokers have a higher rate of criminality,” they wrote in their 2011 bookDrugs and Drug Policy: What Everyone Needs to Know. “Smoking in and of itself does not lead to crime, but within the population of smokers we are more likely to findindividuals engaged in illicit behavior.”

The authors also point out that there’s a much stronger link between violent behavior and alcohol than there is for many illegal drugs: “There is a good deal of evidence showing an association between alcohol intoxication and pharmacologically induced violent crime,” they write.

They added: “There is little direct association between marijuana or opiate use and violent crime. … it is also possible that for some would-be offenders, the pharmacological effect of certain drugs (marijuana and heroin are often given as examples) may actually reduce violent tendencies.”