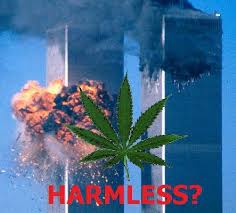 Many Think Marijuana Causes Little to No Harm, Study Finds

Marijuana use is going more mainstream, not only with more states allowing its use in some form — including five more set to vote this November — but also in the way Americans view the drug itself.

According to a new study published in the journal Lancet Psychiatry, substantially more people feel that using Marijuana causes little to no harm.

“Beginning in the 90s with medical marijuana laws, we have seen large amount of people using marijuana themselves and deciding themselves whether it was harmful to them,” Roger A. Roffman, a professor emeritus at University of Washington, School of Social Work told ABC News.

“The idea that marijuana is harmless has been far too widely accepted by people,” he said. “I want to see that pendulum switch back towards accuracy and for us to be more tuned in to what people need to make informed decisions.”

This study looked back at 12 years of data from the National Survey on Drug Use and Health, from 2002 to 2014, and found that more Americans reported they were using the drug and far fewer saw it as harmful.

The number of American adults who said they perceived smoking marijuana once or twice a week to be a great risk dropped from 50.4 percent to 33.3 percent, according to the study, reflecting a major shift in perception of harm.

Almost three times more adults said they felt there were absolutely no risks associated with using marijuana once or twice a week — increasing from 5.6 percent of people seeing no harm to 15.1 percent seeing no risk.

Marijuana remains classified as a Schedule I drug by the Drug Enforcement Administration (DEA), in the same category as heroin and LSD, and is classified as even more severe than Schedule II drugs such as cocaine or methamphetamine.

The general change in risk perception began around 2006 to 2007, according to the research — around the same time that legislation surrounding marijuana began to change. Four states have legalized recreational marijuana use since 2012 and many more legalized medical marijuana use.

“The drum is beating and has been now for a number of years to remove criminal penalties for possession and make it legal to be grown and sold to adults,” Roffman added. “With that movement comes some claims that marijuana is not dangerous enough to justify there being severe criminal penalties. For many people who hear these claims the message translates to them that ‘there is nothing to worry about.'”

He believes the way that advertising, especially political advertising, depicts marijuana can also have an affect the public perception of its use. As campaigns have pushed to legalize marijuana across the country, the ads have reinforced the idea that it’s a less harmful drug.

“In Colorado, the whole campaign to legalize was that marijuana is not as harmful as alcohol,” Roffman noted. He said it’s possible that, as a result, many people could “come to the conclusion that if attitudes change and laws change maybe there is nothing to worry about.”

“That was a controversy from the very beginning,” Dr. Patrick Fehling, an addiction psychiatrist at the University of Colorado Hospital Center for Dependency Addiction and Rehabilitation told ABC News. “Marijuana became legalized before a lot of its effect were fully understood.”

Research on the drug has been limited and is now expanding, in part thanks to legalization and the tax dollars selling it has raised. But, so far, much of the research is actually “indicating potential for harm” from marijuana use, according to Fehling.

“There is a very big difference between recreational use and ‘addictional’ use,” Fehling said. The “signs of addiction include tolerance and withdrawal, loss of control around your use, and consequences and problems in your life around your use.”

“The use of medical marijuana is still highly controversial,” he added, explaining that much of the research is still “anecdotal,” based on what people self-report.

The number of American adults in the surveys who reported using marijuana increased from 10.4 percent to 13.3 percent over the 12-year period. The study, however, largely reflects self-reported data and may not account for how legalization has changed the way people report their marijuana use.

Research on marijuana use of any kind has proven difficult in the past because it remains illegal for recreational use in most states, which may hinder some people from openly admitting their true marijuana usage, if they feel they could face possible legal consequences.

As several recent studies have said, this study notes the need for more research on the drug’s effects, how people are using it and that more education about the risks associated with marijuana are necessary.