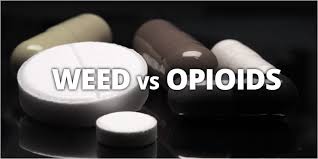 The U.S. is in the grips of a well-documented opiate epidemic. More people in the country now die from heroin and prescription opiates than they do from car accidents. In 2014, nearly 19,000 fatal overdoses were related to legal opiates like Oxycontin and Vicodin, and according to theCenter for Disease Control, at least half of all opiate deaths involve a prescription. Sales of OxyContin, which was initially marketed as non-addictive, alone generate roughly $3 billion each year.

As doctors, law enforcement and policymakers scramble to slow the spread of addiction, marijuana continues showing great promise in the treatment of acute and chronic pain, issues that are currently treated primarily via opiates. Dr. Daniele Piomelli, a professor of anatomy and neurobiology at the UC Irvine School of Medicine, has studied the pain management properties of marijuana and its derivative chemicals for the last 25 years, and is calling the use of marijuana in pain management an encouraging turning point in the opiate crisis.

“Despite what the DEA says, their scheduling creates an enormous difficulty to researchers using marijuana or its derivatives.” Piomelli says. “Even harmless derivatives that happen to be present in the plant have been subjected to the same limitations as marijuana.”

On August 11, the Drug Enforcement Administration formally turned down requests to reclassify marijuana from a schedule 1 to schedule 2 controlled substance, choosing to keep it in the category that also includes heroin and LSD.

“[Marijuana] does not have a currently accepted medical use in the United States,” DEA administrator Chuck Rosenberg, (who was criticized last year after calling medical marijuana a “joke”), wrote in a statement. “There is a lack of accepted safety for its use under medical supervision, and it has a high potential for abuse.”

Meanwhile, pharmaceutical companies including Purdue, the maker of OxyContin, have successfully lobbied to derail CDC prescription reform. Still, progress is being made. A 2015 study that found that the “use of marijuana for chronic pain, neuropathic pain, and spasticity due to multiple sclerosis is supported by high-quality evidence.” Another recent study found “moderate-quality evidence” to support the use of cannabinoids for the treatment of chronic pain.

Marijuana is vastly less habit forming than opiates. Especially promising are cannabinoids (CBDs), which, along with THC, are one of the primary chemical derivatives of marijuana. CBDs mitigate pain by targeting the body’s endocannabinoid system, which is involved in processes including appetite, pain-sensation, mood and memory. Dr. Piomelli, whose UC Irvine lab has studied the endocannabinoid system for more than two decades, notes that CBDs are particularly promising for researchers, as they don’t have the mind-altering or addictive effects of THC.

Opiates, on the other hand, function by reducing the perception of pain by binding to opioid receptors in the body. While effective, opiates are also massively addictive, especially as one’s tolerance grows and greater doses of the drug must be administered in order to maintain effectiveness. Many people, women in particular, spiral into opiate abuse and addiction after being prescribed opiates after routine procedures and surgeries.

“The mu opiate receptor,” says Dr. Piomelli, referring to one of the three receptors activated by opiates, “is so fundamental to the painkilling effects that every opiate by its very definition will cause addiction.”

While Piomelli is encouraged by recent marijuana-related studies, he emphasizes that it is not without risks. Although data regarding the long-term effects of marijuana use is limited, a large-scale study in New Zealand found that the primary long-term health effect of continued marijuana use is gum disease. The potential long-term mental effects require much more careful consideration and research, particularly with respect to teenagers and young adults.

While the complete eradication of opiates is unlikely, treating pain with both substances in tandem is a promising area of exploration. “By using a combination of the opioids and the cannabinoids, one can really lower the doses of both quite substantially,” Piomelli says. “By lowering the doses you of course decrease the risk of addiction and the risk of side effects from both classes of compounds.” He stresses that more research is needed to assess the possible risks of taking both substances at once.

Evidence shows that the increased availability of medical marijuana has decreased the use of opiate drugs in places including California. A 2016 study by researchers at the University of Georgia found that “in the 17 states with a medical marijuana law in place by 2013, prescriptions for painkillers and other drugs dropped significantly compared with states that did not legalize medical marijuana.” Despite these developments, current federal restrictions, along with limited funding for research and a longstanding cultural bias against marijuana, continue to tie the hands of researchers, although a recent development approved for some organizations to explore the possibilities of the plant.

“The major cause of the delay we have is decades of misunderstanding, misconception, and misinformation on cannabis that only now after 20 years of work on the endocannabinoid system we are finally starting to dispel,” Piomelli says.

Piomelli believes that if California Proposition 64, which would legalize recreational marijuana in the state, passes this November, the government may be pushed to do certain things necessary for research on medicinal marijuana to really take off.

“This is one of the times I’ve felt the most hopeful in my life,” he says. “Things aren’t going to change immediately, but I think over the next five years we’re going to see some fundamental shifts.”