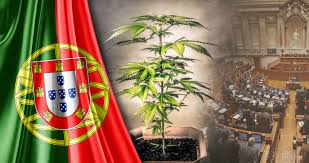 Celebrating 15 Years of Decriminalization In Portugal

Last month Portugal commemorated the 15th anniversary of its 30/2000 law – the law that decriminalized the use of all drugs in the country. The law dictates that the possession for personal use is no longer considered a crime but a regulatory offense. With this step, the Southern-European country waved goodbye to the War On Drugs that had been dominating Portugal’s drug policy for decades and dared to take a whole new approach.

Instead of prosecuting and convicting drug users and people who suffer from addiction, the Portuguese health system focuses on education and prevention of addiction. Every person can carry up to 25 grams of marijuana buds or five grams of hashish, two grams of cocaine and one gram of heroine, MDMA, amphetamine or methamphetamine without having to fear being arrested.

Portugal suffered from a heroin-epidemic in the mid-1990s before the 30/2000 law came into effect. During this period, roughly 100,000 people were addicted to heroin, which was approximately one percent of the population. The number of people dying from overdoses and HIV transmission via shared needle usage was also increasing. This led the government to form an anti-drug commission to tackle the problem.

One of 11 experts in the commission was Joao Goulão, a family physician from Faro, located on Portugal’s Algarve Coast, who is now chairman of Portugal’s Institute on Drugs and Drug Addiction.

He has been the chief of Portugal’s national anti-drug program since 1997 and helped to shape the new law significantly. What started as a brave experiment has proved to be an effective approach to combating rising drug addiction rates and infections that arise from drug use. Since 2001, the number of heroin addicts has dropped by more two thirds. The majority of the remaining persons are accommodated in government programs to treat their addiction. Additionally, the number of people dying through drug abuse decreased by 75 percent. Both drug use among adolescents as well as the number of people who tried drugs for the first time in their life dropped.

While addicts are offered the support they need, drug dealer and traffickers still have to fear stiff penalties. This includes people who grow cannabis. Even if growers own just a small number of plants it is often difficult to prove that those are intended for personal use only. Therefore, people are still convicted for cannabis cultivation.

Besides all these positive effects Portugal’s drug policy in not without its flaws. Unlike other European countries such as Czech Republic, Finland, Spain, Germany or Austria, Portugal has no formalized programs for medical marijuana. While drug users are no longer prosecuted as criminals, decriminalization does not offer a solution for the drug trafficking that has continued unabated during the last 15 years. In 2012 the left-wing party Bloco de Esquerda drafted a bill that would have legalized and regulated cannabis in the country. Unfortunately, the proposal has never been discussed by the parliament and the plant remained illegal.

Although Portugal’s drug laws make it one of the most progressive countries to regulate drugs in the world —and for the last few years statistics have shown that Portugal’s decision to decriminalize the use of drugs has been a step in the right direction — there is still much work to be done. While more and more countries debating new laws concerning cannabis regulation, Portugal’s drug laws have not changed over the last 15 years.

Cannabis users, patients and activists still have a long way to go until the legalization and regulation of cannabis will be implemented. Nevertheless, the steps taken by the Portuguese government highlight the fact that there are effective alternatives to criminalization and the prosecution of drug-users that are far less harmful for individuals and society in general.

Do you think Portugal’s decriminalization strategy could be applied elsewhere?