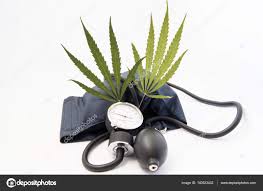 You’ve probably had your blood pressure taken before, but were not quite sure what the reading you got means. The American Heart Association has a great article explaining how to understand your reading. You are given two numbers, the first of which is your systolic blood pressure. This number is always the higher of the two, and it indicates the pressure in your arteries when the heart beats. The second number is your diastolic blood pressure, which measures the pressure in your arteries between heart beats. A healthy blood pressure for an adult is about 120/80: much higher than that, and you’re considered hypertensive. Long term hypertension sufferers are at increased risk for a whole host of problems: heart disease, stroke, heart failure, vascular disease, and kidney disease.

Endocannabinoids and the Heart

The endocannabinoid system is a group of chemicals and their receptors naturally produced by the body to regulate many important functions. A study found that among these functions is the regulation of the cardiovascular system. Researchers found that some endocannabinoids help the heart by normalizing blood pressure and reducing hypertension. Given that this is the very system that cannabis acts on in the brain, it makes sense that the plant can be used in a similar fashion to modulate the heart.

Another study measured vitals of subjects both before and after smoking marijuana. The researchers found that there was a decrease, though small, in both systolic and diastolic blood pressure of the patients after smoking; greater than the group who smoked a placebo cigarette. However, the marijuana used in this study was, at strongest, only 3% THC. Given that the cannabis of today is often above 20% THC, the small decrease in blood pressure found in the study could rise substantially with the stronger marijuana we have available today.

In 2012, a team of researchers looked at the withdrawal effects of cannabis on heavy users. They found that abruptly stopping the use of cannabis significantly increased both the systolic and diastolic blood pressure of the subjects in the study. More notably, these withdrawal effects were reversed when the abstinence period was ended, and the subjects were again allowed to use cannabis. In this study, cannabis use was shown to correlate with lower blood pressure.

The evidence shows that cannabis and its components can reduce hypertension and, as a result, decrease the risk of many serious diseases. Considering how common high blood pressure is for Americans, turning a blind eye to the cannabis plant is just plain old fashioned ignorance.