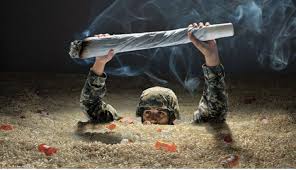 Researchers in Maryland and Arizona are looking for veteran volunteers to smoke up to two joints’ worth of marijuana a day in a new study designed to find out if pot helps relieve symptoms of post-traumatic stress disorder.

“We’re not arguing that cannabis is a cure, but our hypothesis is that it will at least reduce the symptoms,” says physician and study organizer Dr. Sue Sisley.

The $2.2 million study, paid for by a grant from the state of Colorado to the nonprofit Multidisciplinary Association for Psychedelic Studies, will be conducted at Johns Hopkins University in Baltimore, Maryland, and Sisley’s Scottsdale Research Institute in Phoenix, Arizona.

A total of 76 combat veterans will be tested over 12 weeks, but only about four subjects will begin each month across both sites, so the study itself is expected to take two years to complete.

More than 100 veterans already have volunteered, Sisley says. Those interested in taking part in Arizona can email their contact information to arizona@marijuanasites.org.

Those in the Baltimore area can call 410-550-0050 to register their interest in participating.

Initial enrollment is expected to begin next month.

The ideal candidate, Sisley says, will have a disability rating from the Department of Veterans Affairs for combat-related PTSD but otherwise be generally healthy and have no other major medical issues. Those with traumatic brain injuries, however, will be eligible to participate.

Candidates should already have been treated for PTSD with therapy and/or prescription drugs but still have symptoms, she says.

Study participants can be completely new to marijuana use or already an experienced user, but she recommends against daily users applying for the study because all participants will have to be free from any marijuana use for at least two weeks before beginning the study.

“If they’ve already found that it’s beneficial to them, it wouldn’t be ideal for them to just stop,” she says. “That could be pretty brutal for them.”

How it will work

While anecdotal reports of veterans using marijuana to treat PTSD are on the rise, according to Sisley, this study will be the first randomized, controlled trial in the United States to objectively test it as a legitimate treatment for PTSD.

After an initial two-week screening and assessment, participants will be randomly assigned to smoke one of four types of marijuana:

For the first two days, veterans will be observed for four hours after smoking to insure they don’t experience any adverse reactions. In addition to a physical exam and in-depth psychological assessment, which are repeated at the end of the study, participants will also get regular blood tests and other body monitoring throughout the study.

They’ll also be taught the “Fulton Puff Procedure,” which Sisley explains is just a standardized version of the type of smoking common among marijuana users, with a “5-second inhale, 10-second breath hold, 40-second inter-puff interval,” according to study documents.

“They use only in response to PTSD symptoms, so they’re allowed to use anytime in the day or night,” Sisley said. “The veteran is empowered to use however they see fit as long as they don’t exceed the 1.8 grams per day.”

They’ll also be given an iPad to document their use, journal about their experience and video record each time they smoke. They’ll wear a watch designed to track sleep quality.

After the first three weeks, any unused marijuana will be returned and participants will “washout” with no use for two weeks before beginning with another randomized marijuana type.

That will be followed by another two-week washout period and a final battery of tests and assessments before participants begin six months of followups, says Sisley, “to get a sense of what choices they make — do they continue to use medical marijuana, pursue some other kind of treatment or something else altogether?”

If the trial is successful, officials with the California-based Multidisciplinary Association for Psychedelic Studies, or MAPS, say they intend to seek use of smoked botanical marijuana as a federally approved prescription drug.

The U.S. Drug Enforcement Administration gave final approval for the study in April.