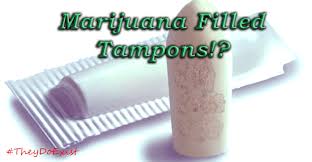 Cannabis Tampons Are Now a Thing

Women who suffer from painful menstrual cramps sympathize with the debilitating discomfort that arrives monthly like clockwork. Motrin, Midol and Advil can take a back seat, however, because there’s apparently a new remedy for cramps: Cannabis tampons.

The company Foria, makers of marijuana-infused personal lubricant, created “relief suppositories” made out of cannabis. According to Foria’s site, these suppositories “maximize the muscle relaxing and pain relieving properties of cannabis without inducing a psychotropic ‘high.’”

Foria’s tampons, which cost $44 for a 4-pack, are made with only three ingredients: cocoa butter, distilled THC Oil and CBD Isolate (99.99%) from organically-grown hemp. CBD Isolate is one of “two key active cannabinoid compounds found in cannabis,” the other being THC, Foria explains on its website. One reviewer of the suppositories claims that the pill “smells like cookie dough and cocoa butter.”

Foria says their primary focus is on relieving pain, with an intention to “share the powerful medicinal properties of this plant while utilizing modern extraction techniques to standardize purity and potency.” Creating a tampon, rather than a pill per se, helps “deliver the medicine directly to where it is needed most.”

There’s a catch though—the tampons are only available in for residents of Colorado and for residents of California with a medical marijuana card or physician’s recommendation letter. The site says that it is working hard “to make Foria available wherever cannabis infused products are available by state law.”