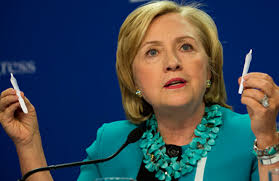 Now that both major political parties have officially named their presidential candidate for the November election, what can voters who support marijuana legalization expect to hear from the candidates and their running mates? If you said, “Not much,” you might consider taking up fortune-telling.

To be fair, economic inequality, terrorism and a host of other issues deservedly rank higher on the political bullet list than does marijuana legalization. But the issue won’t be totally ignored, so here’s your cheat sheet for the next 100 or so days.

Vice-presidential candidates Mike Pence (Republican) and Tim Kaine (Democrat) have both opposed any change to the marijuana laws. We covered that in last week’s report.

Donald Trump, the Republican nominee for president, can’t seem to make up his mind. First he was for letting the states do what they want to do, then he wasn’t, and now he is again. Essentially, Trump’s view is very much a continuation of the status quo. The Republican party platform is against legalization without really coming out and saying it.

Democratic presidential nominee Hillary Clinton has said she favors moving marijuana from a Schedule I drug to Schedule II and has said she supports the use of medical marijuana. That move would allow federal dollars to be used to conduct more research into the effects of recreational marijuana use. Clinton’s position is in line with the party’s platform, which calls for rescheduling the drug and “providing a reasoned pathway for future legalization.”

The candidate with the highest appeal to marijuana advocates is Libertarian Gary Johnson, a long-time supporter of decriminalization, who was president and CEO of Cannabis Sativa Inc. before beginning his run for the Oval Office.

Marijuana pop culture has traditionally centered around the young male smoker and his high times. But the legalization movement has made marijuana more accessible than ever been before, and cannabis’s application as a painkiller is particularly appealing to senior citizens.

So what does the typical, recreational marijuana user look like today? And how do the preferences and spending habits of groups like young men and senior citizens differ?

At Headset, we have a massive dataset of cannabis retailer transaction data, and thanks to customer loyalty programs, we have information about customers’ age and gender. We decided to use to this data to learn more about who buys weed and what they smoke or consume.

The data suggests that smokers in the customer loyalty program are overwhelmingly male, accounting for about70% of all members. And, while customers range from ages 21 to 95, over 50% of loyalty members are under 40.

Colorado gave the green light to medical marijuana in 2000. In 2012, the state sanctioned recreational use, and by January 2014, dispensary store shelves were stocked with potent products of all shapes and sizes. Since then, marijuana-related trips to children’s care centers have almost doubled, though incidence overall remains low. Edibles in particular seem to entice unsuspecting children who think they are sneaking everyday snacks, though secondhand smoke is also a culprit. After accidental marijuana consumption, most children simply become sleepy. In the worst of cases, they can end up intubated.

It’s possible that reports have risen in Colorado in part because doctors are more aware of the problem and parents less reluctant to admit to having marijuana in their homes. But the trend, which holds true in states with similar laws, deserves attention — not least because it could teach legislators considering decriminalization in other localities to exercise caution.

One minute of exposure to secondhand smoke (SHS) from marijuana diminishes blood vessel function to the same extent as tobacco, but the harmful cardiovascular effects last three times longer, according to a new study in rats led by UC San Francisco researchers.

In a healthy animal, increased blood flow prompts arteries to widen, a process known as flow-mediated dilation (FMD). When FMD is compromised, as happens during SHS exposure, blood flow is impeded, and the risks of heart attack, atherosclerosis and other heart problems increase, said UCSF’s Matthew Springer, Ph.D., professor of medicine and senior author of the new study.

“Your blood vessels can carry more blood if they sense that they need to pass more blood to the tissues,” Springer said. “They dilate to allow more blood through. But that’s inhibited by exposure to smoke.”

Read more at the University of California, San Francisco.

Marijuana Legalization Might Be Fix to Nation’s Opioid Problems

Proponents of marijuana prohibition have long alleged that experimentation with pot acts as a “gateway” to the use and eventual abuse of other illicit substances. But the results of a just released national poll finds that most Americans no longer believe this claim to be true.

Their skepticism is well warranted. In fact, science has long discredited gateway theory. More than two decades ago, the National Academy of Sciences Institute of Medicine reported “there is no conclusive evidence that the drug effects of marijuana are causally linked to the subsequent abuse of other drugs.”