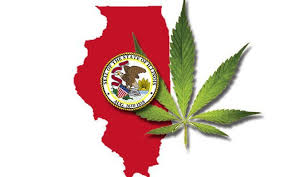 Possession of small amounts of marijuana is now a civil offense across Illinois, punishable only by fines — not jail time.

Chicago has already joined more than 100 Illinois local governments in removing some criminal penalties for people caught with lesser amounts of marijuana. But the new law extends decriminalization to the entire state.

Supporters heralded it as a “commonsense” reform that will keep “countless citizens from having their lives turned upside down” by an arrest for using a drug “safer than alcohol.”

But one conservative group predicted the new law will lead to increased drug use and addiction and send a “troubling” message to pot users and dealers by giving “tacit consent to engage in this destructive behavior.”

Rauner’s office announced the bill signing with no fanfare; it included Senate Bill 2228 — “An Act Concerning Criminal Law” — in a list of 50 different House or Senate bills that the governor signed or vetoed on Friday.

With the governor’s signature, the law takes effect immediately, meaning that possession of 10 grams or less of pot is now a civil, rather than a criminal violation. Fines will range from $100 to a maximum of $200.

Under the new law, courts are required to expunge records of the civil violations each year.

Illinois is now the 21st state to decriminalize possession of marijuana in small amounts, according to the National Conference of State Legislatures.

The new law also addresses driving under the influence of pot, setting a scientific standard for the amount of marijuana’s THC in the blood stream that would prompt an arrest.

Previously, the state had a zero tolerance policy. Even a trace of marijuana in a motorist’s blood could lead to a DUI.

Reactions to the new law are mixed.

“We applaud Gov. Rauner and the legislature for replacing Illinois’s needlessly draconian marijuana possession law with a much more sensible policy,” said Chris Lindsey, senior legislative counsel for the Marijuana Policy Project, which lobbied in support of the bill.

“This commonsense legislation will prevent countless citizens from having their lives turned upside down by a marijuana possession arrest.

“Nobody should face a lifelong criminal record and potential jail time for possessing a substance that is safer than alcohol. Serious criminal penalties should be reserved for people who commit serious crimes, not low-level marijuana offenses.”

It opposed the bill and mounted an email campaign to get Rauner to veto it.

“Governor Rauner and the state lawmakers who pushed to decriminalize marijuana possession have only succeeded in removing a significant deterrent to drug use and addiction,” said David E. Smith, the institute’s executive director. “Too many lawmakers have been erroneously led to believe that our prisons and judicial system are overrun with ‘petty’ marijuana offenses. This is NOT true.

“Even more troubling is the message it sends to users and marijuana dealers: the government gives you tacit consent to engage in this destructive behavior, as long as you pay a relatively small fine. This is regrettable.”

The bill’s chief Senate sponsor, Sen. Heather Steans, D-Chicago, has argued that 98 percent of the more than 50,000 marijuana-related arrests in Illinois each year are for small amounts, intended for personal use.

Rauner’s signing of the bill was expected. He signaled he was OK with the newer attempt at decriminalization in spring, saying “I’ll probably be comfortable with it. I’ve got to see what’s there.”

Last year, the governor vetoed a bill to make possession of up to 15 grams of pot a ticketable offense, saying it would allow people to carry too much pot and that fines should be more than $55 to $125.