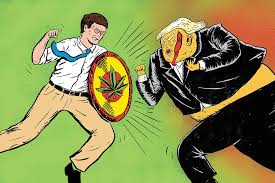 PHILADELPHIA — Marijuana has gone mainstream at the Democratic National Convention this week.

Democratic officials, including Oregon Rep. Earl Blumenauer and his state’s Attorney General Ellen Rosenblum, mingled with pot industry executives Monday night at a reception at a sleek bar downtown, miles away from the convention hall. A day earlier, the Marijuana Policy Project staged a fundraiser to support its work to push new laws around the country legalizing the use of marijuana. And inside the hall Monday, convention delegates endorsed a platform that calls for a “reasoned pathway” for the drug’s legalization.

“This is a very legitimate and very big industry,” said Michael Bronstein, co-founder of the American Trade Association for Cannabis and Hemp, which represents about 20 of the marijuana sector’s biggest players and co-sponsored a crowded weeknight party at bop, a Korean-styled bar and restaurant.

“A necessary extension of a legitimate cannabis industry is for the industry to become politically involved,” he said, explaining the group’s presence in Philadelphia.

The rapidly expanding market for legal marijuana is expected to hit $6.7 billion in sales this year, up from $5.4 billion in 2015, according to industry-affiliated ArcView Market Research.

The use of marijuana for medical purposes now is legal in 25 states, and it can be sold for recreational purposes in four more: Colorado, Washington, Alaska and Oregon. In the nation’s capital, it’s also legal to possess and cultivate cannabis but retail sales are banned.

“Marijuana legalization ranks with marriage equality as the two social issues that have evolved the most rapidly in public opinion,” said Ethan Nadelman, executive director of the Drug Policy Alliance, a co-sponsor of the reception and big force behind legalization efforts.

The legal cannabis industry could be poised for a major expansion this year.

Voters in California, Massachusetts, Maine and Nevada will decide ballot initiatives in November that would allow adults to use cannabis in those states and a push is under way for more ballot measures in several other states this year. In addition, medical marijuana measures have qualified for the ballot in Arkansas and Florida.

“The industry has arrived at a national moment,” Bronstein said. “If California passes it, it changes the nature of this business overnight.”

Nearly 39 million people live in California. “After this election, one out of every three Americans could live in a state where adult use will be legal,” he said.

The Democratic platform calls for the federal government to downgrade marijuana in the federal Controlled Substances Act, given the patchwork of state laws that conflict with the federal statute. It also says states “should be laboratories of democracy” on marijuana and free to decriminalize its use.

Blumenauer, a longtime legalization advocate, called the platform “encouraging” and said 2016 “could be the year when we finally crest.”

“The failed policy of prohibition is wrong on so many levels,” he said, ticking off the benefits of cannabis over opioids for pain management and the potential economic value of industrial hemp.

“The unequal application of marijuana laws come down so heavily on young men of color, especially African Americans,” the bow-tied Blumenauer said, as black-clad servers carved a path among the party-goers, bearing trays of mini-burgers and cheesesteak egg rolls.

Tall glasses of beer and chilled white wine, however, were the only intoxicants on hand. It’s illegal to sell weed in the state, and the event was “not about people getting together to smoke marijuana,” Bronstein said.

“This is not a protest,” he said. “These are people getting together to talk about the business of their business.”

To that end, revelers discussed the clinical trials mandated by Pennsylvania’s recently passed medical-marijuana law and the importance of humidity control in cannabis storage and sales. For instance, Minnesota-based Boveda, long a player in the cigar humidor industry, is adding value to pot sellers because “in a world where product is vended exclusively on weight, we eliminate the loss of money due to evaporation,” saidCharles Rutherford, the company’s business developer director.

The marijuana theme is sprinkled throughout the four-day gathering in Philadelphia.

The Marijuana Policy Project is among the groups granted space to display its pro-weed literature at a downtown convention center where delegates are holding caucus meetings. “This is the most formal presence we’ve had at a Democratic convention,” said Becky Dansky, legislative counsel in the group’s state policies department.

On Thursday, the convention’s closing day, a band of activists is slated to stage a “Cannabis Pride Parade” and tote a 51-foot-long, inflatable joint through the city.