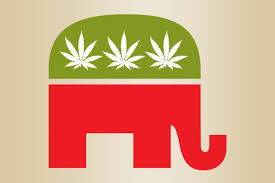 CLEVELAND ― Republican delegates meeting on Monday voted not to endorse medical cannabis in their party’s official platform. In the process, however, they managed to air some of the wildest unproven theories about marijuana.

Maine legislator and delegate Eric Brakey introduced the measure before the full GOP Platform Committee, prompting a vigorous debate over whether to support states that allow nonsmokable cannabis for medicinal purposes.

Medical cannabis has greatly improved the lives of patients with debilitating conditions, noted delegates in favor of the measure. They also said children “are being saved” by hemp products because their conditions often can’t be controlled with any other substance.

But a number of delegates rose in opposition to the measure. A member from Utah claimed scientists have a “long way to go with research” on marijuana and argued that studies, which she did not provide, showed a link between it and mental health issues.

Another delegate absurdly claimed that people who commit mass murders are “young boys from divorced families, and they’re all smoking pot.” Yet another delegate claimed marijuana triggered schizophrenia, and is funded nationally by Democrat and New York financier George Soros. “Let’s think a little bit what happens with Percocet, with OxyContin,” claimed a third delegate, who drew a connection between the ongoing heroin epidemic and teenagers smoking marijuana.

Pro-medical cannabis delegates pushed back, complaining their fellow committee members misunderstood the scope of the proposal.

“We’re not talking about Cheech and Chong being encouraged here,” Brakey said, referencing the comedy duo who support marijuana.

The attempt at clarification may have swayed some votes. Wyoming Sen. John Barasso, chair of the Platform Committee, couldn’t determine at the first attempt whether the measure passed by voice vote. The proposal was voted down on the second vote, however.