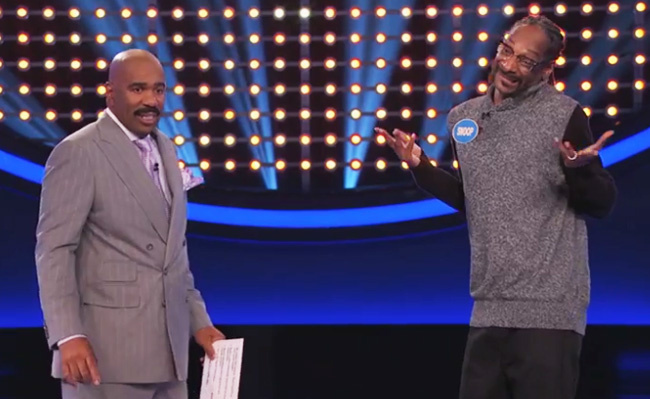 Shockingly, Snoop was beaten out by Sugar Ray Leonard in a cannabis-related category.

When it comes to knowing cannabis, there aren’t many people more qualified to represent the medicinally valuable plant than the OG West Coast rapper, Snoop Dogg. Many would even consider Snoop to be a marijuana aficionado, as he has been spitting verses about weed and publicly smoking kush even before the cannabis laws started to become more lax.

So, it was definitely a bit of a surprise to see Snoop miss the mark on a cannabis-related question on Season 3 of Celebrity Family Feud, the popular game show hosted by comedian and entertainer Steve Harvey. On this week’s episode, Snoop’s family went toe-to-toe with the kin of Sugar Ray Leonard, the legendary fast-handed boxer.

As soon as a marijuana-related category came up, it seemed as if Harvey was prepared to throw an alley-oop to Snoop, asking the two teams to “name something Grandma might do if she caught Grandpa smoking marijuana.” Despite the speedy hands that Leonard is known in the boxing ring for, Snoop hit the buzzer with immaculate timing, and seemed ready to choose the number one answer as soon as Harvey said the word ‘marijuana’.

Ultimately, Snoop decided that if Grandma caught Grandpa burning one down, she would probably ‘put hands on him’ (aka hit him). To combat this answer, Leonard thought it out and decided that Grandma would take the verbal route and just ‘scream’ at him. Leonard’s answer was the number two answer on the board, while Snoop surprisingly hit the fourth most popular answer to the pot-related category.

Despite missing the mark on the question, Snoop seemed to be enjoying himself all the same, helping to bring his down-to-earth vibe to a game for celebrities. Other celebrities participating in Season 3 include Paula Deen, Giuliana Rancic, and teams made up of Bachelor and Bachelorette contestants. Celebrity Family Feud airs on Sunday nights at 8 PM ET on ABC.

Watch a clip from Snoop’s episode below.

Pothole of the week challenger