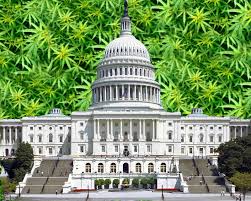 Don’t break out the bong just yet, but Congress is quietly chipping away at the federal ban on marijuana. It’s not happening with a sweeping national law, but through modest provisions slipped into spending bills in recent weeks.

For example: Bills funding the Veterans Affairs Department have a line that lifts a prohibition on medical marijuana. The Senate Appropriations Committee has adopted provisions barring the federal government from interfering on pot enforcement where medical marijuana is already legal. And there’s movement in both chambers to make sure banks don’t get penalized for handling money from legal pot businesses.

None of these will bring overnight change on the federal level. But each little measure shows that Congress, following the lead of the states, is moving in the general direction of legalization, advocates say.

Attitudes around the country and on Capitol Hill have changed so quickly that even advocates of rolling back pot restrictions have been surprised. It was only a few years ago that even the most modest reform proposals were rejected in the House and Senate, said Michael Collins, deputy director of the Drug Policy Alliance. Now? “We just win all the time,” he said, sounding not unlike a certain presidential candidate.

Most of the winning has taken place during the humdrum, but hugely consequential annual appropriations process, and this year is no different. A series of bipartisan provisions to loosen marijuana laws have been attached to government funding bills and are making their way through the House and Senate. In particular, lawmakers are making it easier for doctors to prescribe medical marijuana and are nudging banks to provide services to the nascent recreational marijuana industry, a key step toward legitimizing sales of the drug and paving the way for easy access at stores where pot is legal.

Democrats have typically been the strongest backers of reforming marijuana laws, but Republicans are increasingly lending their support as opinion shifts in red states, speeding up momentum in Congress.

“The missing component was the constitutionalists and the libertarian conservatives,” said Rep. Dana Rohrabacher, a conservative Republican from California, who has rallied GOP support to loosen restrictions.

Rohrabacher helped secure language in a 2014 omnibus spending bill to prohibit the Justice Department from interfering in medical marijuana programs that are legal in the states. The provision was enacted again in last year’s appropriations package and is being pushed on this year’s spending bills as well.

Today, 25 states and the District of Columbia have legalized medical marijuana; another 18 permit cannabidiol, a non-psychoactive ingredient in marijuana that is used to treat epilepsy or seizures in children. Recreational marijuana is legal in four states and the District, with another four voting to do so this year, including California, the most populous state and often a harbinger of change for the country.

“Basically, we have left medical marijuana to the states,” Rohrabacher said, adding, “I think there really is every indication that the states will legalize the personal use by adults of cannabis as well.”

Rohrabacher said he expected marijuana legalization to be a “states’ rights” issue for some time, and that ultimately federal prohibition won’t mean much at all. “Eventually there’s only going to be a few states that held out and kept the ban,” he said.

One of the biggest victories for advocates to come this year would be lifting the longtime ban on veterans even discussing medical marijuana with their Veterans Affairs doctors in states where it is legal.

GOP Sen. Steve Daines of Montana offered an amendment to the VA funding bill in April to allow vets to consider such treatment, calling the restrictions a violation of each state’s 10th Amendment constitutional rights. His amendment was adopted 20-10 in the Senate Appropriations Committee, and the bill was easily passed by the Senate.

A similar proposal, sponsored by Rep. Earl Blumenauer (D-Ore.), was defeated in the two previous years. Not this time — it was adopted by the House last month, 233-189. The language was stripped from a conference committee report on the VA bill last week, but even if it ultimately doesn’t make it to the president’s desk on that measure, it could find life elsewhere. The VA also might act on its own to lift the ban after getting endorsements from a majority of the House and Senate.

The Senate Appropriations Committee recently adopted bipartisan amendments to the bills funding the departments of Justice and Health and Human Services to prohibit the federal government from impeding medical marijuana programs in states where it is legal.

“I want to make sure the law is crystal clear and doctors in my home state of Washington and states like it don’t have to worry about care for their patients,” said Democratic Sen. Patty Murray, who offered the amendment earlier this month to the HHS spending bill.

One of the marijuana industry’s biggest barriers is an inability to access traditional banking services, as most banks are deeply wary of getting involved with a product that remains federally banned. The Obama administration has actually encouraged banks to do business with companies in states where marijuana is legal, but few have done so.

That’s left marijuana dispensaries to conduct business entirely in cash — including transactions with customers and paying employees and taxes — which is catnip to criminals. Just days ago, a former Marine working as a security guard was shot and killed during an attempted robbery at a Colorado dispensary.

Earlier this month, Merkley got an amendment added to the bill that funds the Treasury Department to ensure that banks are not penalized if they provide services to state-sanctioned marijuana businesses. His amendment was adopted by the Senate Appropriations Committee on a 16-14 vote.

Rep. Denny Heck (D-Wash.) had hoped the House would vote on a similar proposal when the House takes up its Treasury spending bill. The House easily adopted the language two years ago, but it did not make it to the president’s desk. His amendment, however, was denied a floor vote last week by the House Rules Committee.

Heck called it a “terrible decision” that would undermine public safety, and he cited the news of the security guard’s killing. “Our worst fears were realized,” he said.

The marijuana industry is closely watching debate over the proposal, which could still be enacted in an omnibus spending bill later this year. “This is more than a symbolic effort; this can have a very real policy impact,” said Taylor West, deputy director of the National Cannabis Industry Association. “It is simply an unsustainable situation for a 5½-billion-dollar industry to continue to not have access to banking services.”

Collins, of the drug policy group, said he was disappointed Heck’s amendment won’t come up for a vote in the House but said such efforts would succeed in Congress sooner rather than later.

“The clock is ticking on prohibition,” he said. “The end is nigh.”