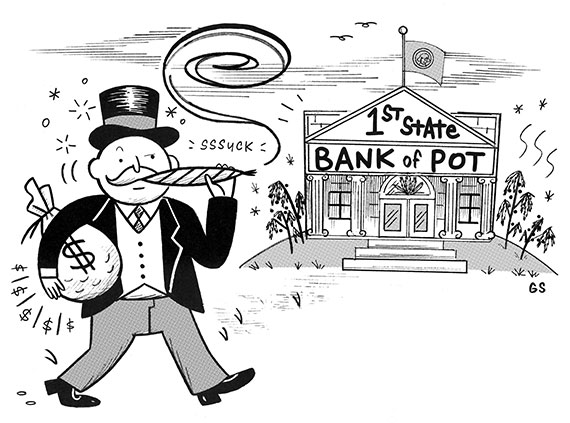 Banks wishing to do business with the marijuana industry without fear of government reprisal inched closer to reality — again — when a Senate committee Thursday approved a measure — again — to do just that.

A bill nearly identical to one passed by the Senate last year, this time sponsored by Oregon Sen. Jeff Merkley and Washington Sen. Patty Murray, was approved by the Senate Appropriations Committee and would forbid the use of federal funds to penalize a financial institution that works with marijuana enterprises legally operating under state laws.

Last year’s effort failed to reach any debate in the House, a similar fate suffered in 2013 of a bill passed by the House and later stifled in the Senate.

But the third time could be a charm.

This time committee members passed the measure as an amendment to the Financial Services and General Government Appropriations Bill, which gives annual funding for some government operations. This year’s bill, which funds the Treasury Department, the judiciary and agencies such as the Securities and Exchange Commission, is about $22 billion.

“This amendment is really about providing clarity, stability and security for our banks, credit unions and small-business owners who want to be able to operate in full daylight,” Murray said in a statement.

The amendment passed 16-14 and was met with cautious optimism by an industry that’s said banking is a critical need for businesses forced to operate mostly in cash.

“The legal cannabis industry is a billion-dollar business in Colorado and contributes significantly to the tax base, yet we are denied the access to banking that every other industry enjoys,” said Brooke Gehring, a business owner and board chairwoman of the Marijuana Industry Group. “This impacts more than just business owners. Tens of thousands of people who work in the legal cannabis industry as well as service providers have problems banking.”

Stand-alone legislation has been introduced in each house of Congress — SB 1726 by Merkley and HR 2076 by Rep. Ed Perlmutter of Arvada.

“I’m pleased to see the Senate taking action to help provide access to the banking system for legal and licensed marijuana businesses,” Perlmutter said in a statement. “I plan to offer the same amendment in the House so financial institutions are not penalized for helping to get cash off our streets which is a serious public safety concern for our communities.”

The U.S. Department of Justice has said it wouldn’t spend time prosecuting financial service companies that work with legal marijuana businesses as long as they follow strict guidelines of compliance — but stopped short of offering blanket protection against enforcement. Many bankers worry that they could risk losing accreditation and face money-laundering charges if a marijuana business client turns out to be a front for the illegal drug trade no matter how diligent they are at vetting them.

Other efforts have included a push to legalize a credit union in Colorado specifically for the marijuana industry. The Fourth Corner Credit Union, although it obtained state approval to operate, was stymied in its work at landing a critical master account with the Board of Governors of the Federal Reserve System when that group’s rejection was upheld by a federal judge.