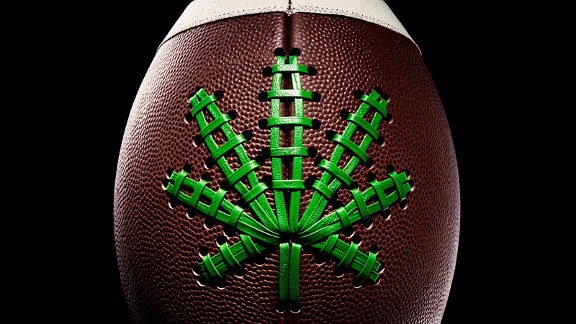 Josh Gordon, wide receiver for the Cleveland Browns, got suspended for a year for testing one nanogram over the marijuana limit. A year off for toking up in the same season when Baltimore Ravens running back Ray Rice only had to take two games off for punching the mother of his toddler daughter’s lights out? Well, it was Gordon’s second offense.

On September 8, a new surveillance video surfaced that actually showed fist to face and Janay Rice née Palmer falling unconscious. After having sponsored a press conference on March 23 where Rice’s faithful lady (who would marry him six days later) publicly apologized for assaulting his fist with her face, the Ravens canned him. Having already punished Rice, the NFL raised the two-game suspension to an indefinite suspension. Double jeopardy only applies to the government.

The NFL has since beefed up penalties for woman beating to a six game suspension on first offense and a “lifetime ban” on second offense (with possible reinstatement after one year). My cynical cousin Ray Sixkiller is taking bets on those petitions for reinstatement.

The Washington Post reported that the NFL is about to strike a deal with the players’ union that will move the threshold for a positive marijuana test upward. By even the current standards, Mr. Gordon barely failed with one urine sample and barely passed with the other half of the same sample. As NBC reported, if the A and B labels on those two cups had been reversed, the second half would never have been tested and Gordon would have passed. Cousin Ray thought a year off was a little heavy for a result based on chance but he really wanted to know if the marijuana rules would apply to the Broncos and the Seahawks?

The US Supreme Court decided in 2001 that the government needs a search warrant to use thermal imaging technology on your private property to reveal “grow lights” used for, among other things, marijuana cultivation. Citizens expected privacy because thermal imaging was not then in “general public use.” Since 2007, Wayne State University law professor Tony Dillof has been tracking the appearance of thermal imaging devices on EBay and watching the numbers double every year. Dillof claims to be preparing an analysis for the Journal of Armchair Empiricism and the Law. Cousin Ray speculated that High Times might have been a better venue for Prof. Dillof’s research, “and he should seriously consider Sports Illustrated.”

The NBA lost another owner to public racism, an issue that has yet to trouble the owner of the Washington team in the NFL. Atlanta Hawks owner Bruce Levenson opined, “the black crowd scared away the whites and there are simply not enough affluent black fans to build a significant season ticket base” and “the kiss cam is too black.” Levenson volunteered to sell the Hawks rather than make a circus like former Los Angeles Clippers owner Donald Sterling, who admonished his girlfriend not to bring blacks to Clippers games, particularly retired superstar Magic Johnson. Cousin Ray wondered if NBA owners were hanging around with NFL players? “I heard that secondhand smoke can get you stoned.”

After $2 billion spent, Congress pulled the plug in 1993 on the Superconducting Super Collider being built by the Department of Energy in Waxahachie, Texas, in spite of the explanations by Nobel winner Leon Lederman in a popular science book, The God Particle: If the Universe Is the Answer, What Is the Question?

The cancellation moved the cutting edge of physics research to Switzerland, where, in 2012, European researchers demonstrated the physical (as opposed to mathematical) existence of Higgs boson aka “the God particle.”

The Times of London reported that Professor Stephen Hawking, author of A Brief History of Time, has warned that at very high energy levels, the Higgs boson could become unstable. In Hawking’s words, “This could mean that the universe could undergo catastrophic vacuum decay, with a bubble of the true vacuum expanding at the speed of light. This could happen at any time and we wouldn’t see it coming.”

The on line echo chamber is going crazy over reports that a Brevard County, Florida police department is buying 8 Apache Attack helicopters. Professor Google returns five pages of links to “prove” it. The county bought some choppers back in 2011, to use for the normal things counties do—rescue, pest control. Not Apaches. Not armed. “The real question,” Cousin Ray said, “is whether the bozos spreading this will pay any price for being wrong again?”

Gov. Bob McDonnell of Virginia has been convicted of 11 counts of corruption. His attempt to blame his wife, a former cheerleader for the Washington football team, did not fly. Gov. McDonnell’s extraordinary public humiliation of his wife represented an audacious defense that would otherwise require the jury to believe that a stranger gave the first couple of Virginia over copy60,000 worth of stuff and the favors that followed were not out of the ordinary. The claim was that the “family values” husband was so crosswise with his out of control wife that they could not have conspired together. In pursuit of showing that estrangement, he put on a “defense” that completely trashed Maureen McDonnell.

Another family values hero, Pastor Mark Driscoll of the Mars Hill megachurch empire that branched out from Seattle to have 15 locations in five states, has described women in a tortured, extended and just weird metaphor as “homes” for penises. Driscoll was already facing allegations of plagiarism and misappropriation of church funds, but the people he called “penis homes” appear to have sunk attendance and contributions enough that three locations have already closed and more closures are contemplated.
–
Via