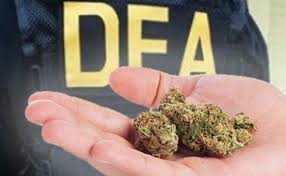 For narcotics agents, who often confront hostile situations, Capitol Hill has been a refuge where lawmakers stand ready to salute efforts in the nation’s war on drugs.

Lately, however, the Drug Enforcement Administration has found itself under attack in Congress as it holds its ground against marijuana legalization while the resolve of longtime political allies — and the White House and Justice Department to which it reports — rapidly fades.

“For 13 of the 14 years I have worked on this issue, when the DEA came to a hearing, committee members jumped over themselves to cheerlead,” said Bill Piper, a lobbyist with the Drug Policy Alliance, a pro-legalization group. “Now the lawmakers are not just asking tough questions, but also getting aggressive with their arguments.”

So far this year, the DEA’s role in the seizure of industrial hemp seeds bound for research facilities in Kentucky drew angry rebukes from the Senate’s most powerful Republican. The GOP-controlled House recently voted to prohibit federal agents from busting medical marijuana operations that are legal under state laws. And that measure, which demonstrated a shared distaste for the DEA’s approach to marijuana, brought one of the Senate’s most conservative members together with one of its most liberal in a rare bipartisan alliance.

How much the agency’s stock has fallen was readily apparent in the House debate, when Rep. Jared Polis (D-Colo.) denounced the agency’s longtime chief.

“She is a terrible agency head,” Polis said of Administrator Michele Leonhart.

The two had previously clashed over the DEA’s insistence that marijuana continue to be classified as among the most dangerous narcotics in existence.

“She has repeatedly embarrassed her agency before this body,” Polis said.

Leonhart, who declined through a spokesman to be interviewed, is not getting much backup from the White House.

This year, she complained that President Obama seemed alarmingly blase about what she sees as a pot epidemic. Her remarks to dozens of sheriffs gathered at a conference in Washington came soon after Obama told the New Yorker magazine that marijuana seemed no more dangerous to him than alcohol.

“She said, ‘I am so angry the president said what he said and completely ignored the science,'” recalled Thomas Hodgson, the sheriff of Bristol County, Mass.

Her remarks were so frank, Hodgson said, that another sheriff who had been attending such meetings for three decades interrupted Leonhart to tell the crowd what a risk she was taking. The audience then gave her a standing ovation, Hodgson said.

Leonhart went on to complain about a softball game White House staff had participated in with marijuana advocates, and declared that one of the low points of her career had been seeing a hemp flag fly over the Capitol — a display Polis had requested.

When Leonhart left, Hodgson said, she got another standing ovation.

The enthusiasm from law enforcement agents suggests why Leonhart, a holdover from the George W. Bush administration, where she served as acting DEA chief, remains ensconced in her post even as more than 42,400 people have signed a petition demanding her resignation.

“The Obama administration has to walk this tightrope,” said Sam Kamin, a law professor at the University of Denver. “The youth vote and a number of populous states are moving in one direction, and elements of law enforcement are not.”

He added: “These are people who have spent their lives enforcing marijuana laws. To say we are going to let the states decide what federal law is, is difficult for them to swallow.”

The DEA also is operating amid mixed signals.

Many lawmakers think marijuana should no longer be classified among the most dangerous drugs, but they’re reluctant to vote to change federal narcotics law. And despite cautious acceptance of state legalization laws by the White House, its enforcement strategy is ambiguous. The statutes that guided narcotics agents at the height of the war on drugs to aggressively go after pot remain on the books.

After word spread in May that Atty. Gen. Eric H. Holder Jr. had called Leonhart in for a private chat and admonished her to stop contradicting the administration, Rep. Frank R. Wolf (R-Va.) rushed to her defense.

Wolf accused Holder’s office of a “Nixonian effort to pressure a career law enforcement leader into changing her congressional testimony.”

Leonhart “has done an outstanding job leading this agency during a challenging time,” Wolf wrote in a letter to Holder.

But that view no longer commands a clear majority in Washington, as the agency repeatedly has run into congressional opposition.

The usually unexcitable Senate Republican leader, Mitch McConnell of Kentucky, reprimanded the DEA after it impounded 250 pounds of hemp seeds en route to the University of Kentucky from Italy. The seeds were to be used by researchers exploring the possibility of reintroducing the hemp industry in the U.S.

Hemp, the fiber of a non-psychoactive cannabis plant, can be manufactured into clothing and numerous other products. One thing it can’t do is make a person high. Nonetheless, the DEA deemed the seeds a controlled substance.

McConnell said the agency was wasting limited resources on the seizure “at the very time Kentucky is facing growing threats from heroin addiction and other drug abuse.”

Amid political pressure and a lawsuit from Kentucky’s Department of Agriculture, the agency granted the university an expedited controlled-substances permit.

The hemp offensive bewildered even some longtime DEA allies.

“It is an unnecessary fight,” said Robert Stutman, a retired director of the agency’s New York division. “It doesn’t affect the drug issue one way or another.”

The hemp case also irritated Kentucky’s other senator, tea party favorite Rand Paul, who signed on to sponsor the Senate version of a House measure that would curb raids on medical marijuana dispensaries.

A desire to rein in the DEA has kindled an intriguing political alliance between Paul and Sen. Cory Booker (D-N.J.), one of the chamber’s most liberal members, who is cosponsoring the measure.

As the DEA has struggled with the politics of marijuana, it also has faced a spate of incidents requiring administration officials to clean up after agents.

The Justice Department last year agreed to a $4.1-million settlement with a man whom DEA agents left handcuffed in a San Diego holding cell without food or water for five days. And federal investigators are looking into charges that the agency has been improperly collecting phone company data and concealing from defendants how the information was used against them.

But neither those problems nor changes in public opinion have caused the agency to shift its ground. The DEA’s latest policy paper on pot declares the medical marijuana movement, which has won victories in 22 states, to be a fraud.

“Organizers,” it says, “did not really concern themselves with marijuana as a medicine — they just saw it as a means to an end, which is the legalization of marijuana for recreational purposes.”

Displayed prominently in the DEA Museum at its Arlington, Va., headquarters is part of a California dispensary that narcotics agents raided and shut down. It sits alongside the rebuilt front of a crack house.