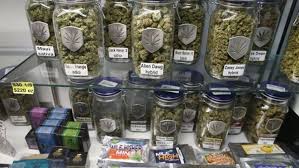 By Ricardo Baca
The Cannabist Staff

Thomas Beckley and John Evich were on Cloud 9 when we spoke with them on the morning of July 8 — an unbelievably bustling Cloud 9 with electricity in the air and cash in the registers.

“We’ve had about 400 people in four hours,” said Beckley, an owner at Top Shelf Cannabis in Bellingham, Wash. “We opened exactly at 8 a.m., and through the news we saw that we were the first shop to open in the state of Washington.”

“I’m pretty stoked,” said Evich, another Top Shelf owner. “This is so new, and we’re lucky just to get open — as that was a huge task. Right now the traffic is flowing smoothly, and we’re thankful for that.”

Top Shelf served around 1,000 grams of legal retail marijuana to more than 400 customers in its first four hours of business on July 8, Beckley said after referencing his in-house tracking system. Since the shop’s median per-gram price is $12.50, that makes for roughly $12,500 in sales for those four hours — or about $3,000 per hour.

“The line right now has dwindled down a little bit,” Beckley said. “Tonight, when everybody’s off work, I think it’ll be twice as much as it was earlier.”

The Top Shelf owners made international news earlier this week when they talked publicly about possibly using one of their crab boats or renting a helicopter to transport their marijuana stock from Bremerton to Bellingham — to expedite the process of finally opening their doors for their first legal retail sale.

That grand and elaborate plan didn’t work out.

“We ended up not using it because we ran into some aviation rules and we couldn’t go on the water because of the Coast Guard,” Beckley said. “The FAA and the Coast Guard told us they wouldn’t recommend trying it.”

Evich attributed their smooth launch on July 8 to a couple factors, including his request for a smaller manifest for their weed delivery — which allowed them to count 50-something bags of marijuana before starting sales instead of counting 2,200 bags — and the shop’s BioTrackTHC point-of-sale equipment and software.

Even given all the excitement Tuesday morning, Top Shelf Cannabis actually opened its doors a few minutes after 8 a.m.

“Our door opened at 8:03 a.m.,” said Evich, “because complying and working with the state is the No. 1 priority — even over customer service.”

Where can I smoke this?