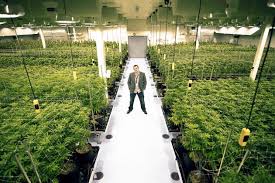 Opinions and preferences aside, there is no denying the fact that the legalization of cannabis is creating a “green” rush of sorts, with individuals and businesses seeking to claim their piece of the pie. As the proverbial ball gets rolling, it will be vitally important to stay educated on the different avenues of investing, as well as the risks involved and what will likely happen in the markets in the coming months and years. This month I take a look at some methods of investment, and break down how you can turn a profit on pot.

To begin, it is important to have a basic understanding of financial tools. There are multiple ways to invest, each having its own perks and downfalls. First off, with all investments there is an inherent risk. You may have heard the phrase “the greater the risk, the greater the reward.” This rings especially true in the finance world, but you must be aware that for every potential dollar in gain, there are three potential dollars in loss. With that disclaimer, here are a few ways to invest.

First and most obvious, you can invest in capital by purchasing equipment to cultivate, process, or distribute marijuana yourself. This is the riskiest and most time consuming form of investing, and requires a great amount of knowledge, expensive state-issued licenses, and large amounts of tangible and intangible assets (not to mention requiring living in Colorado or Washington, at least for now). As the post-prohibition era begins to take hold and more states begin to legalize cannabis, big business is undoubtedly going to cast their shadow on the industry (I mean come on now, why wouldn’t they?). Therefore, without a few million in start-up capital, years of experience in whatever industry you’re going into, and a MBA in Business Management from Harvard, other investment opportunities may better fit your situation.

The next financial tool that I would like to discuss is bonds. In laments terms, bonds are a certificate of debt issued by a company to an individual in exchange for capital up-front. Most times bonds include coupon payments, which are periodic (quarterly/semi-annual/annual) payments equal to a percentage of the “face-value” of the bond. Bonds are usually sold at a discount to the face-value. In other words, a bond with a face-value of $1000 will normally be sold for less in the market. If the bondholder keeps the bond to maturity, the difference between his purchase price and the face value of the bond is where the bondholder turns a profit.

Alternatively, bonds may be bought and sold freely in the marketplace, and the price will typically rise towards the maturation date of the bond (the date at which the face value is paid to the bondholder). It is important to note that in the case of bonds, usually the bigger the discount there is on a bond, the riskier the bond is. While bonds carry some risk, they are generally believed to be a “safe” investment, as in the event of bankruptcy, bondholders are paid out after banks but before stockholders.

Finally, stock investing is the most recognizable, yet least understood investment tool. Stock certificates are ownership of, or equity in a company. For each stock certificate you purchase, you are given a certain percentage stake in the company. Unfortunately, most times the percentage is miniscule if you purchase only a handful of stock, but in some cases you are given voting rights in executive decision making, proportionate to your holdings.

There are several ways to turn a profit using stocks. I am not going to get into using methods such as short positions, options, etc. However, the most basic method of profiting from stock is holding a long position and collecting dividend payments. Holding a long position means to hold the stock for a period of time in order to allow the price to appreciate in the market. This is the typical “buy low, sell high” philosophy. While you may think that this is extremely risky (which, I will be honest, it is), most people do not know that with some shares of stock comes a dividend, or profit-sharing, payment.

Similar to the aforementioned bond payments, dividend payments are typically paid on a quarterly, semiannual, or annual basis. However, there is no set dividend amount paid per share (a company may or may not pay a dividend at any time), and they are decided by the management of the company. Shares of companies who pay dividends are typically more expensive, as there is an assumed income stream associated with ownership.

Companies have begun to issue stocks and bonds, and the prices of stocks related to marijuana have seen a huge uptick since the election in November 2012. Medbox (MDBX), who manufactures and maintains medical marijuana vending machines, saw its shares skyrocket during the second week of November 2012 to $63.00 from around $4.25 in the beginning of the month. The stock is currently leveled out and trading around $18 solidly. Other notable companies that are currently publicly traded include Cannabis Science (CBIS), GreenGro Technologies, (GRNH), Hemp, Inc. (Hemp), and Medical Marijuana, Inc. (MJNA). Obviously as things develop out on the west coast, many more entities are bound to pop up.

As it becomes more and more clear that marijuana is one of the largest cash crops the world will probably ever see, money-hungry investors on Wall Street are destined to dip their hands in the pockets of the industry. Therefore, I believe it is very important to act on investment opportunities as soon as possible. That being said, while I do have an education in finance, I am not in any way licensed to offer investment advice. As I’ve said several times, it is vitally important to do your research before deciding to embark on any financial endeavor. There are a lot of snakes in the grass, so to say, and the risk of loss is never zero. In the coming months, I will take a look at the big players in Washington and Colorado as the wheels begin to turn for their state regulated cannabis systems. Strap yourselves in; we are in for a wild ride!

The time is now.