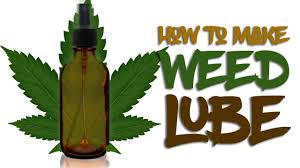 We’ve been mixing weed with other products for centuries: cannabis can be found in paper, your fifth grade camp necklace, and “special” brownies. Now, thanks to the efforts of a team of social entrepreneurs, weed is about to be in your lube. Today, founder Mathew Gerson is introducing a pleasure enhancement product that is as timeless as it is innovative — FORIA personal lubricant, specifically designed for women. Women who like marijuana, that is.

That’s because the active compound in the oil is THC and other cannabinoids. The cannabis-based medical marijuana is blended with MCT oil or liquid coconut oil for a product that is viscus, slippery, toy-safe, and completely vagina-safe (if you were wondering: coconut oil can help fight off yeast infections).

Gerson, a life-long fan of using coconut oil as personal lube, says the product works specifically for women because of the very sensitive and absorbent membrane of the vagina and entire vulva — inner and outer labia and clitoris included. “Introducing medicines, and compounds, and different drugs through the vagina is something that both modern doctors and doctors throughout history have done,” Gerson explains to Nerve. “So the breakthrough in regards to introducing medical marijuana in that capacity is that the modern extraction techniques that allow for there to be a very, very distilled and very pure oil form of marijuana make it easier to create an oil that can be introduced to the female body through the vagina. What our results and testing has shown is that there’s quite a broad spectrum of responses that happen.” Gerson was hesitant to share with us what some of these effects definitively are, and that’s partially because currently there is no standardization of medical marijuana dosing, and no literature or FDA studies on taking such a product through the vagina.

Women in preliminary testing of FORIA experienced different results depending on a number of factors, including if they had recently had a meal, their mood, their energy level, and where they were in their menstrual cycle. But in broad strokes, Gerson claims that some of the attributes women have been reporting en masse are heightened sensation, warmth, tingling, or a sense of swelling or engorgement after using the weed-infused lube. Other women were turned on and hyper aware of the tightness of their genitals, which lead to a greater sexual pleasure. All of these effects were localized to the genitals, however. “For most women, relaxation is a key attribute in the experience of pleasure and arousal. We live in the time and era where we have a lot of residual stresses coursing through our bodies because of modern technology and the pace we’re all living. The body is sort of new to this pace. The body’s been around a lot longer than our iPhones have,” Gerson explains.

That de-stressing characteristic is what makes the idea of medical marijuana-infused personal lube so compelling: “women report a sense of embodiment, a sense of dropping into a more full relationship to sexual sensations, and sensations around the body. As you can imagine, as that builds up to orgasm, if orgasm is a part of your experience, then that can lead to intensification and a more full body experience,” Gerson notes. That stands in line with a lot of what little we know about marijuana’s interaction with sexuality. According to William Novak‘s High Culture: Marijuana in the Lives of Americans, pot can account for increased heart rate, changes in respiration, changes in blood flow, and THC releases pleasure-inducing neurochemicals like dopamine and anandamide. (The DIY circuit has been on to the idea of pot and sex for a while, just check out your local Reddit thread.)

Ancient Indian Ayurvedic medicine systems and tantric sex practitioners alike have used marijuana for its libido-enhancing, sense-heightening properties. “So, just like any aphrodisiac throughout history,  it has more subtle attributes that will enhance or mitigate certain qualities that might be present in your system already,” Gerson says. That doesn’t mean it gets you high-high, though. The psychoactive responses normally associated with smoking a joint — the giggles, the munchies, the belief that Harold and Kumar Go to White Castle is actually a funny film — won’t be felt. We’re still not really sure how a vagina metabolizes pot. But the one fun possible kickback of the lube is this: it’s edible. Just like good pot cookies, lollipops, and brownies, the THC in the lube is potent enough to get you high-high if you ingest it. If this sounds like an excellent incentive to go down on someone, Gerson agrees.

FORIA will be quite the unique product (aside from the whole getting high during a blowjob part) in that it might be one of the first female “enhancement” products to ever reach the shelves. For anyone who desires it and has a doctor’s note, FORIA will be available if you have a medical marijuana license in the state of California. While about 24 male sexual enhancement products are on the market, women’s desires and needs have been left in the pharmaceutical dust. Part of that is because women’s sexuality disorders are harder to put a finger on, because a good portion are mentally based and not purely physical. Another problem is the actual efficacy of the products, but medical marijuana, the old standby of ancients and California doctors alike, could change that game.

Gerson himself isn’t as interested in changing the game as much as adding to it. Gerson’s main focus has always been on enhancing the well being of people and the essential experience of sexuality. The seasoned entrepreneur once headed the brand Sir Richard’s Condoms, an all natural vegan condom with a 1-for-1 model in Haiti, and since then he’s been looking for a way to put marijuana back into the modern sex life.

While male partners probably won’t feel the effects of the medical marijuana lube because a penis isn’t nearly as absorbent as a vagina, Gerson says the team at FORIA is working on the next generation of male enhancement products, with a potential weed-infused prostate lube coming in the future. But for now, the focus is on women. “We’re really excited to re-present a very old medicinal to the marketplace, specifically packaged and presented and sensitively brought on to the market for use by women…There’s not a lot of competition, and I think we need more competition in this space. The more the merrier because everyone’s biochemistry and body and experience around sexuality is so unique that we need a lot of different tools in the medicine chest here to address the issues,” Gerson explains.

So, whether FORIA is indeed the next contender in sexual enhancement, a true tool to aid female sexual relaxation (or at least a quality placebo), is still left to be determined by the medical marijuana license-carrying public. I asked Gerson about his most ringing endorsement thus far. “A lot of the testing we were doing was individuals doing it alone. A friend told me it was the best self-sex of her life,” he says. “That’s really great. It’s certainly not something you need to have a partner with to partake in.”