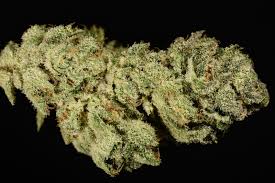 A cross of U.K. Cheese and Tang Tang, there’s a mix of that dairy dankness with fruity bubble gum that’s strangely harmonious

By Jake Browne
The Cannabist Staff

When you’re in pain for a prolonged period of time, you’re willing to try any available option, including marijuana. I had inexplicably forgotten this in a recent battle with an inflamed wisdom tooth that brought me to tears several times. In fact, it took a drive past The Health Center’s Uptown location on my way back from the dentist for the thought to click. It had been years since I had been there, and years since I had tried one of my favorites: Ultra Sonja.

A lot has changed since I worked at what was once Colorado Dispensary Services at 17th and Downing. Most important, it has a new name, staff, and setup. It still looks like a bed-and-breakfast joint that’s been converted to a pot shop, only now with metal security windows and an extra counter where the reading area used to be — like your parents turned your old bedroom into their office.

Looking for the strongest indica they had in stock, I passed on some other oldies but goodies like Moe G Kush and Alien Dawg. They had my girl: Ultra Sonja.

This strain has been popping up left and right as Tierra Rojo’s genetics continue to proliferate throughout the scene. The Sonja had always been a favorite of mine as a budtender, as the unique smell and name fit for a Street Fighter character made it an easy sell. There just isn’t a lot of ganja like this out there. A cross of U.K. Cheese and Tang Tang, there’s a mix of that dairy dankness with fruity bubble gum that’s harmonious and complementary as you crack it open. Having a wine and cheese party? It’ll pair well.

I’m used to seeing at least a little purple in the Ultra Sonja, while this phenotype was more forest green with dark orange hairs. The bud structure was just as dense as expected, though, holding up well to a good squish. It’s also as frosty as a random spring snow here in Denver, although I wish there was a little more amber in the trichomes. Not that the cure was rushed, as the smell and texture were both exactly what I was looking for. When you’re dealing with tooth pain, you can find anything to bitch about.

So after a couple of bowls out of my favorite spoon, I was pleasantly surprised to feel … pleasant. While cannabis does have some great pain-relieving qualities, I’ve always felt that it’s primarily a great way to get your mind off of whatever is troubling you. Unless you smoke the wrong sativa, at which point that’s all you’re thinking about.

Instead, this served as both: the dull ache that had been plaguing me was suddenly gone, accompanied by a cheeriness I hadn’t felt in days. I wasn’t bouncing off the walls, as I probably would have been if I had smoked a good sativa to cure my cabin fever, but I also wasn’t as unbearable to be around. At least according to my girlfriend.

I’m assuming that the anti-inflammatory properties of pot helped in this regard, as well as just a change of head space. I’d been avoiding heavy duty pain relievers but also hadn’t smoked. The biggest benefit, however, was just extending the periods of sleep I was getting. Instead of waking up every hour or so, I was getting in at least three hours of sleep before waking up and slapping more Orajel on my gums. I didn’t tempt fate by wake-n-baking the next morning, but it wasn’t immediately sleep-inducing the night before, so it might have been worth the risk.

I’m still waiting to have this chomper yanked, but I wouldn’t have made it through the weekend without an emergency visit to the dentist without Ultra Sonja. When I do go in, I fully plan on listing it under “medications I’m currently taking.”

For me, this is what medical marijuana is all about. The only thing I’m worried about is dry sockets when I keep puffing after it’s pulled.