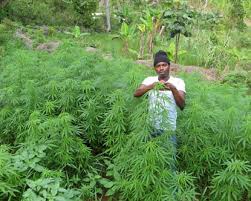 THE EDITOR: The controversial debate surrounding the legalisation and decriminalisation of marijuana has once again become a topical issue in the Caribbean and on the international front.

Amendment 64 in Colorado will amend the state constitution to legalise and regulate the production, possession, and distribution of marijuana for people age 21 and older.

In the Caribbean, Jamaica has placed great emphasis and spent millions of dollars in the eradication and interdiction of marijuana throughout the years. Decriminalisation could reduce the country’s spending on policing and enforcement of legislation aimed at criminalising marijuana use. Less government funds would be required to channel into the criminal justice system for arresting, prosecuting, sentencing and incarcerating marijuana users. The resources saved in this way may therefore be used in properly protecting Jamaica’s borders from cocaine traffickers and regulating the production, possession and distribution of marijuana for people age 21 and older.

Further legalisation of marijuana is likely to increase the supply of marijuana and as the law of demand dictates, an increase in the supply will reduce prices. This is probably an effective way to remove the profits out of drug trafficking and force traffickers out of business.

Jamaica is recognised as producing and consuming the highest quantity of marijuana in the Caribbean, and during 1981-2000 was recorded as the number one producer in the world (Caribbean Drug Trends 2000- 2001). The US in its 2014 International Narcotics Strategy Report noted that Jamaica remains the largest Caribbean supplier of marijuana to the US and other Caribbean islands.

Marijuana has and continues to contribute directly and indirectly to the Jamaican economy and has the potential to contribute greater to the stabilisation of the economy and put average Jamaicans to work. The proceeds from illicit drugs is said to contribute 7.5 percent to Jamaica’s GDP (The Economist, March 8, 2008).

Via Trinidad and Tobago Newsday