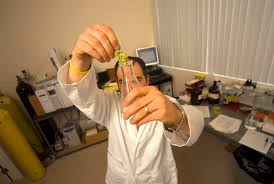 By Eric Gorski
The kitchen of Brian and Meghan Wilson’s rental home in Denver’s Washington Park neighborhood looked like a chemistry lab. Using beakers, glass dishes and a botanical extractor, the couple coaxed oil from dispensary-bought marijuana plants, desperate to control the epileptic seizures of their 3-year-old daughter, Vivian.

Before giving it to the little girl, who likes to draw on an easel and play with her toothbrush, the Wilsons took their homemade oil to a Denver marijuana testing lab to make sure the dosage was correct.

All of that stopped after state regulators began informing marijuana testing labs that as a condition of holding a state license to test, they may only accept samples from licensed recreational pot shops, infused-product manufacturers and medical marijuana dispensaries.

But it also means those labs, some of which had been operating for years before being licensed, can no longer test for individuals.

That leaves curious consumers, hemp growers and anyone who makes their own oils, edibles and tinctures with little recourse.

It means licensed labs cannot test for caregivers treating cancer patients or parents such as the Wilsons who have flocked to Colorado to obtain medical marijuana for their gravely ill children.

“This was one of the reasons we moved here — not only access to medicine but access to labs,” said Brian Wilson, who uprooted his family this spring from New Jersey, where he helped reform the state’s medical marijuana laws. “This is a major concern for parents.”

The Wilsons, for now, are not at risk. Vivian has access to oils from a Colorado Spring dispensary that has received international attention for a strain called Charlotte’s Web. The oil is rich in cannabidiol, or CBD, but low in THC, marijuana’s main mind-altering chemical.

Still, Brian Wilson said he previously made about half of his daughter’s medicine and considers it a safety net in case other sources run out. Some parents, he said, are experimenting with their own oils while on a waiting list for Charlotte’s Web, which its creators say is tested for dosage, molds, pesticides and solvents.

She wears an eye patch over her left eye to control her sensitivity to patterns, eats a diet high in fat and protein, and ingests cannabis.

“There is no prescribed solution yet,” her father said. “Even for the kids having a lot of success, they are all on different stuff. You need that ability to find out what’s going to work.”

Unregulated and unlicensed labs have offered testing on medical marijuana in Colorado for years. But testing was always voluntary.

The state began licensing labs to carry out mandatory testing of recreational marijuana, legalized by the passage of Amendment 64 in November 2012. The testing, which will be rolled out in phases over the next few months, began Thursday with the testing of edibles for potency.

So far, the state has licensed seven labs. State officials informed some of them of the prohibition on testing for individuals in March.

A provision in state rules allows labs to also test for medical marijuana businesses, but testing continues to be voluntary for dispensaries.

The state Marijuana Enforcement Division requires licensed labs to track all samples through the state’s inventory tracking system, which all licensed marijuana businesses must use. Because of that, individuals are effectively blocked from going to labs, the state says.

Medical marijuana patients, then, cannot test their own dispensary-bought marijuana — a valued option for some because there is no state rule mandating that the products be tested.

Division director Lewis Koski said “product accountability” is a cornerstone of regulation. Anything that fails a test at a licensed lab is flagged so it cannot enter the marketplace, which would be impossible with marijuana outside the tracking system, he said.

“It’s very important from a regulatory perspective that you put guardrails up,” Koski said, adding that the issue was discussed at length in public forums during the rulemaking process.

Jeannine Machon, co-owner of CMT Laboratories in Denver, said she understands the state’s rationale. And some caregivers — individuals who grow medical marijuana for others — game the system and get doctor’s recommendations for high plant counts, allowing them to grow huge volumes, she said.

But others are looking out for their patients, she said.

“Honest to God, I think it’s sad,” Machon said. “The MED is in a horrible spot, knowing the country has its eyes on us.”

The restrictions are being felt by caregivers such as Ryan Rice, who takes medical marijuana for his multiple sclerosis, and grows marijuana plants and makes an oil his patients use to treat cancer.

Until the prohibition, he said he took his marijuana concentrates to be tested for cannabinoid profile and residuals such as butane, which is used in an extraction method. He said he grows organically, but the test results give patients peace of mind that he is not using pesticides.

“It’s ridiculous,” Rice said. “I’ve got to be able to test those plants and know that my patients are getting the right medicine.”

State officials should have little to fear from labs, which take in small amounts of marijuana and destroy it all, said Ian Barringer, founder of Rm3 Labs in Boulder, which opened in 2009 and is seeking a state license.

Unlicensed labs are an option for patients and caregivers. But Barringer suggested that running such a lab would be cost-prohibitive and risky because of the lack of legal cover a state license brings.