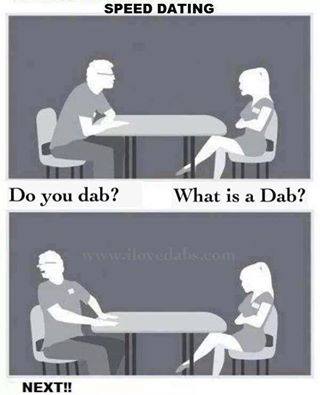 ….Weeks after the introduction of legal recreational marijuana sales in Colorado and we already have a speed dating event for people who partake.

“For those who do partake, it’s important their partner or potential partner do that as well,” said Tina Allman, the SpeedLA Dating office manager who oversees events in 18 cities throughout the U.S. and Canada. “It’s a nice icebreaker, and it’s nice going into a group knowing that that question’s off the table.”

SpeedDenver had posted a 420-friendly event in February that was rescheduled because of weather — for 8 p.m. April 8 at Vinue (the cost is $42). It might be perfect timing for a 4/20 connection.

“We posted it in the first place because we got requests,” said Allman. “We’ve been hosting events across the country for seven years. We’re a bit on the cheeky side. We don’t offer specialized events all that often, but we got so many requests for a pot-friendly event in Colorado that we thought it would be a fun thing to do. It’ll be interesting to see what kind of crowd comes in.”

SpeedLA’s events are known for being casual, chic and informal, according to user reviews. And perhaps most importantly, the company will have an even number of men and woman at the 420-friendly event — regardless of pot’s patriarchal stereotype.

“We’ve already had a great response,” said Allman. “Usually our events are 15-20 guys, 15-20 girls. We don’t like to do much more than that, because it can be overwhelming to meet so many people over the same night. If this one is successful, we could do one a month, especially in the warmer months.

What kind of reaction is Allman’s company hearing exactly?

“People seem to be appreciative that we’re offering it,” she said. “Some find it funny or embarrassing. It’s still kind of taboo to some people. Some have asked if they can partake at the venue, but we can’t do that because we’re not in a private space. But that would be nice, and maybe down the line we could look at other opportunities where partaking could happen on site.

“But mostly they’re glad it’s a question they don’t have to ask. They want to ask it, but they’re still shy.”

Voters Say They’re More Likely To Turn Out If Marijuana Is...