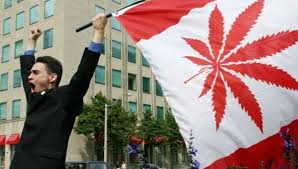 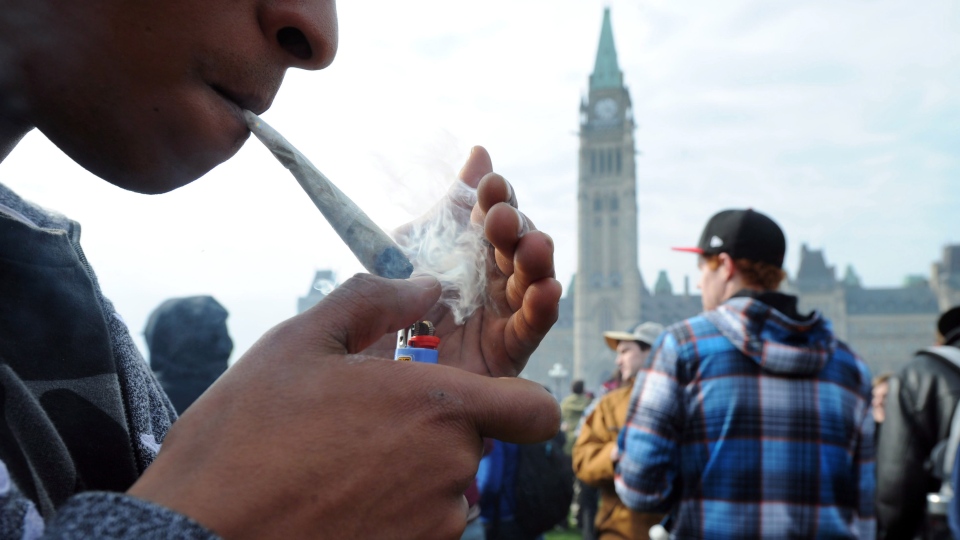 A handful of medical marijuana users carrying signs and smoking joints descended on Parliament Hill Tuesday, one day after Ottawa said it would challenge an injunction that bars new rules requiring marijuana users to receive their supply from commercial growers.

Protesters said the Marijuana for Medical Purposes regulations will make it harder for them to access the drug they need.

“What Health Canada has done is forced patients to worry about our basic health maintenance versus our liberty,” Debbie Stultz-Giffin, a medical marijuana user diagnosed with chronic progressive multiple sclerosis, told The Canadian Press.

The new program will allow patients with prescriptions to purchase up to 150 grams of dried weed each month from suppliers.

Alison Myrden, who suffers from neuralgia and was diagnosed with chronic progressive multiple sclerosis in 1992 says she relies on medical pot every single day. She says the drug has helped her vastly cut back on the morphine and other medications that used to leave her essentially bed-ridden.

“Literally, cannabis has gotten me out of my wheelchair and walking again on most days,” she told CTV’s Canada AM from Ottawa Tuesday, prior to the rally.

“It’s stopped the violent shaking. And I have an excruciating pain in my face and head 24 hours a day that’s known as the worst pain in medicine called ‘tic douloureux’ and literally, I can get relief from that pain within minutes of smoking a marijuana cigarette.”

Myrden has been growing her own pot for more than 15 years and doesn’t want to have to be dependent on a commercial supplier. She says the new rules that limit her to carrying no more than 150 grams or 5 ounces of pot at a time are also a problem.

“Five ounces would not last me if I went away for a week. So that’s the sort of thing we’re fighting,” she says.

The new regulations had been due to come into force on tuesday, but for now, the 40,000 medical marijuana users in Canada have been given a reprieve. The Federal Court of Canada issued an injunction earlier this month that allows patients to continue to grow their own supply for now. The federal government announced Monday it plans to fight that injunction.

But for those who didn’t have their own grower, the commercial regime will proceed as planned. That means for the first time, patients will need to get a prescription from their doctor and then send in a request to a commercial producer. The marijuana will then be shipped directly to them using a secure courier.

Doctors not comfortable with new rules

Dr. Chris Simpson, the president-elect of the Canadian Medical Association, says physicians are not pleased with the new system either.

He says it’s a big change to have Health Canada licensing patients to use medical marijuana, to asking doctors to write prescriptions – even while Health Canada continues to insist that it does not endorse marijuana as a medication.

“So it puts physicians in a very difficult position to go against the way we’re trained and our ethics, which is to do no harm and expect a high level of evidence,” Simpson told Canada AM.

The College of Family Physicians has also said that Health Canada is placing doctors in an “unfair, untenable and to a certain extent unethical position by requiring them to prescribe cannabis.”

Simpson says surveys show that physicians in Canada don’t feel comfortable prescribing a drug when there has not been enough large, long-term studies that offer good evidence that marijuana is both safe and effective.

“The evidence cited by the medical marijuana industry is really not the quality-level evidence that we’re used to seeing when other drugs are approved for therapeutic use. There’s a lot of anecdotal evidence,” he said.

He adds: “It’s a dangerous practice to fall back on anecdotal evidence and small studies that aren’t properly conducted. So we are calling for more trials and the federal health minister supports our view on that.”

Simpson notes that the results of a trial on the use of marijuana for the relief of arthritis pain were released earlier this month and that study found the drug was not effective.

“The history of medicine has many examples of potential medicines that appeared on the surface to be very promising only to be shown that they are not effective at all in a proper clinical trial.”

Myrden and other medical pot users say they are also concerned that the new system will make their drug much more expensive.

But Paul Rosen, the CEO of PharmaCan Capital, which has already invested in three medical marijuana growing outfits across the country, doesn’t expect that the new system will change much. And he says the new Marijuana for Medical Purposes regulations will ensure that patients have access to a regulated and quality-assured product.

“The supply and the affordability should be absolutely the same once the market matures,” Rosen told Canada AM.

“But more significantly, patients will be able to have a great deal more knowledge about the efficacy of the medicine they’re taking.”

At the same time, Rosen adds, there is still an opportunity for commercial growers to make money.

“Our view is that the new regulations, while still providing affordable access to patients, does present to the commercial grower a reasonably-speaking compelling business opportunity. So we feel the affordability issue is not in conflict with the profitability model.”