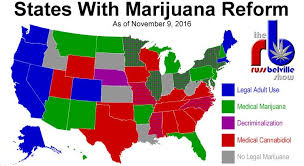 With marijuana legalization in Colorado and Washington, and the possibility of other states following suit, more states have passed new DUI laws for pot that aim to make sure people don’t drive after smoking marijuana.

“There’s a new fear that people driving under the influence of marijuana will increase as a result of the liberalization of marijuana laws across the country,”said Paul Armentano, deputy director of pro-pot legalization nonprofit NORML.

This map, from Denmon & Denmon Trial Lawyers, shows the ways states can charge drivers with DUI for marijuana these days. In every state, it’s illegal to drive while impaired by any controlled substance, including pot.

“You cannot drive impaired in all 50 states. Whether it’s a Xanax, Valium, or marijuana, if a police officer determines you’re impaired because of that substance, it’s illegal,” Armentano told Business Insider.

In “effect-based” states, prosecutors must prove that ingesting marijuana impaired your driving. But so-called “per se” laws actually set limits for the amount of pot (either THC or metabolites) that can be in your system while driving. In “zero-tolerance per se” states, it’s illegal to have any pot in your system while you’re driving.

“Under effect-based standards, the burden is on the prosecution to determine if ingestion of a controlled substance caused enough impairment so that the driver could not drive safely,” Armentano said. “With per-se laws, that’s no longer the standard.”

Some people think setting limits for marijuana use seems crazy. For states that do require specific levels for conviction, testing becomes necessary. Many of these methods vary in their accuracy though, according to NORML.

Urinalysis
Contrary to popular belief, urinalysis can’t detect the presence of any illicit drugs, including marijuana. It can only identify the presence of non-psychoactive drug metabolites (compounds from chemical changes in the body caused by drugs, not drugs themselves). Cannabis metabolites can be detected in the blood up to a month after use, so it’s impossible to know exactly when the person took the drug, according to NORML. States mostly consider urinalysis unreliable for DUI testing.

Blood Test
Blood tests detect the actual drug, not the inactive metabolites. Generally, THC is only detectable in the blood for a few hours. Chronic smokers may show low, residual levels for up to 24 hours, though.

Because of this narrow detection window, blood tests are typically considered reliable for DUI conviction.

Hair Test
Considered unreliable, hair strands testing also detects the presence of metabolites that have moved from the blood stream to the hair follicle. This test, however, is more sensitive to minorities and people with darker hair as well as the elderly (with grey hair), according to NORML.

High humidity can also rapidly break down marijuana metabolite levels in the hair of heavier smokers, increasing the chances of a false-negative.

Breathalyzer
Breathalyzers for drug detection are a relatively recent invention. One of the first hit the scene in spring 2013. Created by a Swedish company, the device correctly identify drug use in 87% of cases, according to U.S. News & World Report. Critics say, however, that these devices can only detect drug use, not levels or state of impairment.