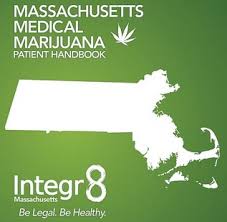 The waiting room of Integr8, a new type of medical practice that opened in a Burlington office building last October, was crowded with patients. One leaned on a walker, another gripped a plastic grocery bag filled with pill bottles. There were twentysomethings and senior citizens.

Many were drawn there by the same thing: medical marijuana.

With names such as CannaMed and Delta 9 Medical Consulting, a dozen physicians offices have opened across Massachusetts in recent months to evaluate patients to use marijuana.

Many envisioned that most patients would consult with their regular doctor to decide whether they could benefit from the drug to treat a debilitating condition. Instead, the 2012 referendum that legalized medical marijuana is giving rise to a new niche — psychiatrists, anesthesiologists, obstetrician-gynecologists, internists, and pain specialists turned medical marijuana specialists.

Even though medical marijuana dispensaries are not expected to open for months, these doctors have already “certified’’ hundreds of patients to grow or buy the drug. CannaMed, a California company that now has a Framingham branch, has approved 1,000 patients, its lawyer said.

The state’s largest doctors organization is critical of many of the new practices. Dr. Ronald Dunlap, president of the Massachusetts Medical Society, questioned whether doctors should be allowed to set up practices that provide access to one particular drug, which he says can create a conflict of interest for the physicians and may not be in the best interest of patients.

“The commercial part of this is way ahead of the curve,’’ he said. “They rented office space before the regulations were even approved.’’

These practices are flourishing in part because mainstream physicians are often reluctant to certify chronically ill patients who want to use marijuana. Many doctors do not believe medical marijuana is supported by science — or are waiting for their employers to develop policies. Until they approve guidelines, most hospitals and large doctors’ groups are leaving the decision up to individual doctors, but a few, including Beth Israel Deaconess Medical Center, have told physicians not to certify patients for now.

Physicians who do decide to approve patients will have to take courses on the risks and benefits of medical marijuana.

Patients, many suffering from pain that they say has not responded to conventional treatment, pay doctors $200 to $250 for an initial evaluation and a certification that will protect them legally if they are caught with the drug. And the physicians do not have to deal with insurance companies, which do not cover the visits.

Some doctors also sell hand-held vaporizers, cultivation books, and other products. In addition to marijuana certification, Integr8 provides a wide array of alternative pain treatments such as “Chinese cupping,” acupuncture, and osteopathic manipulation.

On a recent Friday, Nancy Nangeroni, 60, arrived for an appointment at Integr8 with Dr. Joey Rottman, a former obstetrician-gynecologist who now specializes in pain management. Nangeroni has suffered from disabling neck, shoulder, and back pain since a 2004 car accident. Rottman asked for her medical records, and she handed him a thick yellow folder.

State law requires that doctors who certify patients have a “bona fide physician-patient relationship,’’ including seeing patients in the office, assessing their medical history, explaining the benefits and risks of marijuana, and being involved in their ongoing care. Integr8 and many of the other Massachusetts practices warn patients on websites that they must provide medical records, documenting their condition, before they can be certified.

Rottman glanced at Nangeroni’s records, and asked questions about her pain. She told him only three things help: physical therapy, marijuana, and limiting her activities. Nangeroni has bought the drug illegally, but said she does not want to continue supporting an unregulated industry.

Until the dispensaries open, certified patients can grow their own marijuana or obtain it from a “personal caregiver” — a hospice provider, visiting nurse, or other assistant who has agreed to help the patient use medical marijuana. Caregivers will eventually have to register with the state.

During the visit, Rottman said Nangeroni had not been smoking marijuana correctly. “So we’re going to change the way you do this,’’ he explained. If she feels “a buzz,’’ he said, that means she’s smoked about twice as much as medically needed. “With marijuana, less is more.’’

Rottman sold Nangeroni an emerald green pocket device for $234 used to inhale marijuana vapor, which he said is odorless and less toxic than smoke. He then promised to send a summary of her 45-minute visit to Nangeroni’s primary care doctor with Lahey Clinic, who Nangeroni said supports her use of medical marijuana but does not plan to provide certifications yet.

Integr8 Massachusetts, a franchise of Integr8 Health in Maine, is owned by psychiatrist Dr. Thor Agustsson, whose practice has certified “hundreds” of patients so far. Agustsson said his goal is to wean patients off addictive narcotics, which make them drowsy and require escalating doses to control pain. “We see results that are amazing,’’ Rottman said.

Dr. Harold Altvater, a former hospital anesthesiologist, used $20,000 in savings to open a solo practice for certifying patients to use medical marijuana in February 2013. Dentists, physical therapists, and a dialysis center are his neighbors in the two red-brick medical office buildings he works out of in Malden and Methuen. He has given talks to pain management doctors and sent out brochures to generate referrals, resulting in 350 certified patients so far.

They include a 47-year-old businessman who came in on a recent Friday with chronic muscle and joint pain that has grown intolerable over the last year. His primary care doctor and several specialists have not been able to identify the cause, he said, but one prescribed a narcotic-like pain reliever that caused serious side effects.

“The problem is that the pain never ends, it’s just 24/7,’’ said the businessman, who did not want to be identified because he’s worried about hurting his career.

His doctor, who works for Partners HealthCare, told him he was not opposed to medical marijuana but that “he wasn’t going to get involved in it.’’ After a two-hour visit, Altvater certified him to use medical marijuana — at a cost of $250 — though the businessman said he will wait until dispensaries open rather than grow marijuana or buy it illegally.

In states with years of experience with medical marijuana, officials have questioned whether some doctors are running certification mills. A June 2013 report from the Office of the State Auditor in Colorado, which legalized medical marijuana in 2000, found “evidence suggesting that some physicians may be making inappropriate recommendations.”

One piece of evidence: Just 12 physicians had certified half of the 108,000 registered patients, and one had registered more than 8,400 — numbers so high they call into question the existence of a “bona fide relationship,’’ the report said.

Many physician websites in Colorado advertise convenient service, such as walk-in and weekend hours, suggesting the evaluations might not be objective, auditors found. Another question is how many patients are turned away; if almost every patient walks out with a certification, that’s a red flag.

Altvater said he rejects about 50 percent of potential patients during an initial telephone screening because they do not have the proper medical records or are otherwise unqualified. “I am contacted regularly by law enforcement’’ looking to confirm that a person arrested for possessing marijuana actually qualifies for medical use, he said. “You really want an evaluation that is bullet proof.’’

State public health officials said they are developing an online registration system that will monitor doctors who certify patients; anyone suspected of improper conduct will be referred to the Board of Registration in Medicine, officials said. And, they said, they are “working closely with all the facilities’’ to make sure they’re operating legally.

Still, Dunlap, the medical society president, questions the appropriateness of these practices. “You can’t have a clinic that just gives out one substance. I can’t open an oxycodone or a Percocet clinic. That is not medicine, then you are an access point for a specific substance.’’

Dunlap said a full-service pain clinic would be a more appropriate place for patients to get certified. Then, if a patient was not a good candidate for marijuana, doctors could offer other therapies or drugs.

Matthew Allen, head of a medical marijuana advocacy group, said his organization pushed for regulations that allow patients to get certified by a doctor other than their regular physician. “We don’t want any barriers,’’ he said. “Our hope is that medical marijuana will be pulled within the folds of existing medical institutions. That is a long-term process and will take a lot of education.’’

Via The Boston Globe