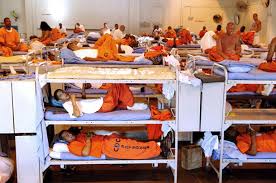 On February 12th, Italy’s constitutional court struck down a 2006 law which categorized marijuana the same as heroin and cocaine and thus tripled the prison sentence of those caught with marijuana.

The court ruled that the law was “illegitimate,” without much other elaboration. The 2006 law was passed by the conservative government of former prime minister Silvio Berlusconi, who is now surrounded with personal controversies of his own. He has just gone on trial for corruption charges, he was stripped of his Senate seat last year for tax fraud conviction, and may also face trial for paying showgirls to lie about an affair with an underage prostitute.

Berlusconi’s personal issues aside, the 2006 drug law was an egregious use of government force: categorizing marijuana in with hard drugs and increasing the sentences from 2-6 to 6-20 years. Needless to say, locking a human being in a cage for simply owning a medicinal plant, which is arguably a human rights violation in and of itself, and tacking on years and years of jail time is just rubbing salt in the wounds of individual freedom.

The official data for the Italian prisons reveals that they are operating far beyond capacity, with 62,000 inmates living in facilities that were built to house only 48,000. The prisoners’ rights group Antigone claims that 40 percent of all inmates are serving their sentences for drug crimes. Italy has the most crowded jails of any nation in the EU.

In January 2013, the European Court of Human Rights ruled that Italy’s overcrowded prisons violate the basic rights of inmates. The court set a fine against the Italian government at 100,000 euros ($131,000 US) and ordered it to institute the change within a year.

Senator Carlo Giovanardi, one of the original writers of the law, said the ruling was “a devastating choice from a scientific viewpoint and in the message it sends to young people who some drugs are less dangerous than others.” Oddly, he is suggesting that black and white thinking is somehow superior to perceiving the world as different shades of gray. On the other side of the political aisle, Alessia Morani, an MP with the centrist Democratic Party, said “the ruling puts the final word on one of the absurd laws that parliament has ever passed in recent years.”

This is a rather small step, but still a step in the right direction as far as drug legislation goes. If you take a look at the trends around the world, drug legalization/decriminalization is spreading slowly but surely. One good sign is an open letter that was penned to president Obama, by seventeen congressmen, in which they asked the president to direct attorney general Eric Holder to reclassify marijuana from Schedule 1 of the Controlled Substances Act. The letter was bipartisan, and they pointed to Obama’s own hypocritical views on the subject of drug classification.

“You said that you don’t believe marijuana is any more dangerous than alcohol: a fully legalized substance, and believe it to be less dangerous in terms of its impact on the individual consumer. This is true. Marijuana, however, remains listed in the federal Controlled Substance Act at Schedule I, the strictest classification, along with heroin and LSD. This is a higher listing than cocaine and methamphetamine, Schedule II substances that you gave as examples of harder drugs. This makes no sense. Classifying marijuana as Schedule I at the federal level perpetuates an unjust and irrational system.”

From a rational standpoint is hard to understand why such reasonable changes have taken so long to manifest, and why so many in power continue to argue against empiricism and science in favor of prohibition. Italy’s decision is a step in the right direction, but the journey is far from over.

Via Exposing the Truth