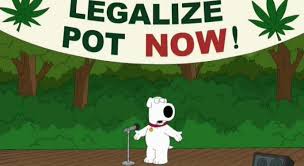 Governor Lincoln Chafee could become the first governor in America to legalize marijuana without putting the decision to the voters.

After attending a meeting of the National Governors Association in Washington, D.C., last week, Chafee discussed the possibility of “pot for potholes” – using marijuana sales revenue for infrastructure improvement – by passing a bill approved by state lawmakers.

At least one local expert thinks it’s a dangerous proposition.

“Coloradans legalized pot and their governor noted that going out and getting tax revenue is absolutely the wrong reason to even think about legalizing recreational marijuana. He is correct. Marijuana can put young people at risk. Let’s see what happens in Colorado before jumping into the pool.”

Legalization through bill vs. ballot box

Chafee agrees on the timetable. Although Rhode Island lawmakers are now contemplating the possibility of legalizing by bill instead of ballot box, Chafee wants to see how legalization works in Colorado before making a decision.

Last month, a bill that calls for the legalization of marijuana to be regulated and taxed like liquor sales was introduced. The bill was sponsored by Sen. Josh Miller, D-Cranston, chairman of the Senate Health and Human Services Committee, and Edith H. Ajello, D-Providence, chairwoman of the House Judiciary Committee.

“I would like to see a referendum but I did co-sign the legislation,” said District 65 Representative Gregg Amore (D).

“The War on Drugs has been an utter failure by every measure. The idea that marijuana use will significantly increase based on legalization does not ring true with me. I think we have a better opportunity to regulate and control if we legalize. A national legalization would dry up the black market as it did with alcohol.”

Amore is also a teacher at East Providence High School, which adds perspective to his position.

Chafee has said the potential revenue is enticing for all governors. With his seat up for grabs in the upcoming election, the decision could fall into the hands of the next governor.

“Prohibition does virtually nothing to reduce use, and it causes a number of problems such as allowing violent drug cartels and gangs to make billions of dollars in tax-free profits in the black market. Bringing the marijuana trade aboveground, where it can be taxed, will benefit users and nonusers alike.”

Regarding tax revenue from marijuana sales, Angell referred to recent projections from Colorado Governor John Hickenlooper, “which shows that marijuana taxes there are absolutely going to benefit schools and public health programs to the tune of tens of millions of dollars,” Angell said.

Colorado’s retail marijuana shops opened in January. Though he opposed marijuana legalization, Hickenlooper released an aggressively optimistic new proposal last week regarding the revenue the legal marijuana industry could bring in for the state. Hickenlooper’s budget office expects the recreational and medical marijuana industries will pump nearly $134 million in tax and fee revenue into state coffers in the fiscal year beginning in July. The proposal estimates sales in all marijuana stores to approach $1 billion for that fiscal year. Recreational pot shop sales are estimated to account for more than $600 million of that — a more than 50 percent increase over a previous projection.

Washington State is right behind Colorado, with retail sales of marijuana slated to start this spring. Financial experts there predict marijuana revenue could bring in $190 million in taxes over a four-year period.

But what of the ethical ramifications of legalizing a substance that is still controversial, despite its growing acceptance in American culture? The comparisons to cigarettes, alcohol and casino gambling revenue are obvious. Could this be called another “sin tax?”

“Legalizing ‘pot for potholes’ is a dead end street. While it’s tempting to think that this avenue will make up for lost gambling revenue, the fact is that those who sell pot through the black market will continue to do so with more pure forms,” said former Rhode Island Attorney General Arlene Violet.

“It will soon become a market for the ‘kid stuff’ – which is legalized versus what you get as the ‘real stuff’ with a better high. We are only creating more candidates for stronger “highs”.

Legalizing pot for the sake of revenue may be short-sighted and dangerous, according to critics. But most agree that the issue is twofold: How much money will the state bring in versus the potential damage caused by the proliferation of legal drugs.

“Well, it certainly would help make up the gambling revenue decline RI is headed for because of the new betting operations that will be opening in RI, said former Providence Journal political columnist M. Charles Bakst. “Personally, I’m not sure legalizing non-medical marijuana would be a good thing on the merits, though I could be convinced. And if it indeed is a smart thing to do for society, the justice system etc, the revenue would be a nice bonus. But I’m with those who say look at the issue itself first, don’t rush into it just to make a buck. It’s terrible that RI became so addicted to the revenues from slots, which I believe prey upon people’s weaknesses and turns them into robots mindlessly handing over their money.”

Dan Kennedy, Assistant Professor in the School of Journalism at Northeastern University, is on the same side.

“Personally, I think casinos are a terrible idea and that legalizing marijuana is a good idea. In general, though, if you’re legalizing activities that are harmful to society for the sole purpose of raising tax revenues, you’re headed down a dangerous road,” he said.