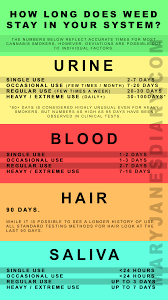 It’s one our great debates – just how long does pot remain detectable in the body? A couple of weeks? A month? Three months? It’s an issue directly impacting drug testing for employment and determines whether a driver busted for a cannabis DUI can be legally regarded as being under the influence – even if sober when pulled over.

Most states in the US and seven European nations have set legal limits for blood cannabinoid concentrations; if drivers exceed it, they could be convicted. Of course, that doesn’t always accurately reflect current pot use.

Metabolites, small molecules that are intermediaries and products of metabolism of marijuana’s chemical compounds, are what remain in the body and can be detected by testing. After a person consumes pot, the psychoactive compound THC is metabolized via the liver by select enzymes, first into the active Hydroxy-THC, then transforming to the non-psychoactive THC Carboxylic Acid (THC-COOH), a fat-soluble metabolite that exits the body slowly. Pot enters the bloodstream in minutes when smoked and takes 20 minutes or more when orally ingested, and can leave the blood within 24 hours – but not always (more on that below). While pot is detectable in urine longer than in blood, this only reveals recent use, never intoxication. Some THC metabolites have an elimination half-life (the time it takes for them to lose half their pharmacologic activity) of 20 hours. THC-COOH has the longer elimination half-life of 13 days, generally regarded as the threshold for detecting cannabis in urine.

However metabolites have reportedly been detected in urine tests of heavy users for over three months. A 2009 published study of a pregnant Norwegian woman, who chronically smoked cannabis, found THC-COOH in her urine for 84 days after she finally gave up smoking (she was threatened with forced hospitalization if she didn’t quit, permissible under Norwegian law). Another ‘09 study, “Do (THC) Concentrations Indicate Recent Use in Cannabis Users,” published in the journal Addiction, assessed the whole blood THC concentrations of 25 frequent cannabis users who were confined to a secure research facility during a weeklong span of pot abstinence. The results revealed whole blood THC concentrations that were highly variable among participants, with nine having no quantifiable THC at any time. However, six subjects displayed substantial THC concentrations in their blood even after seven days of cessation from cannabis. These findings further substantiate that issuing marijuana DUI’s in one-third of America – a dozen states have zero tolerance for pot metabolites in the blood – is actually punishment for being a stoner, not for being stoned while driving.