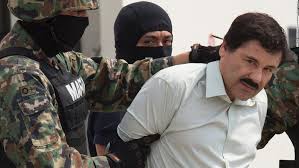 The feared drug lord, who heads the fugitive list of U.S. drug officials, was busted in Mazatlan. Guzman is charged in a federal indictment in Brooklyn, along with five co-defendants, with running the massive Sinaloa Cartel — which one official says has brought more cocaine, heroin and meth into the U.S. than any other organization.

The world’s most powerful drug lord has been captured in Mexico — and he’ll face justice in New York City.

The 56-year-old billionaire head of the Sinaloa Cartel — labeled “the godfather of the drug world” by the DEA — will be tried in Brooklyn Federal Court, a law enforcement official told the Daily News.

“Chapo is the face of the Sinaloa Cartel and is recognized as the biggest drug trafficker in the world,” the official said. “By far, the Sinaloa Cartel is responsible for bringing more cocaine, heroin and meth into this country than any other organization.

“Hundreds of murders, if not thousands of murders, are attributed to him, if not by his own hand, under his direction,” added the official, who requested anonymity.

Guzman’s arrest represents a huge victory in Mexico’s bloody drug war that has killed at least 70,000 people, including children, since 2006. No shots were fired when authorities came upon Guzman in bed with an unidentified woman at 6:40 a.m., authorities said.

Joaquin Guzman, the world’s most-wanted drug lord, was arrested Friday night in Mexico without incident. Worth $1 billion, he’s been hiding out since 2001, when he escaped a maximum security prison in Mexico by bribing guards to smuggle him out in a laundry cart.

Following his arrest, masked marines held Guzman by the neck as they escorted him to a helicopter at Mexico City’s airport. He sported a white shirt, dark jeans with no belt and a thick mustache as he headed to a Mexican prison.

The law enforcement official said federal prosecutors hope to bring him before a judge in Brooklyn in about a year. Guzman is charged in a federal indictment in Brooklyn, along with five co-defendants, with running the massive drug cartel.. He faces other indictments throughout the U.S.

“The criminal activity Guzman allegedly directed contributed to the death and destruction of millions of lives across the globe through drug addiction, violence, and corruption,” Attorney General Eric Holder said.

U.S. authorities expect their Mexican counterparts to cooperate with an extradition request, given that the last time Guzman was behind bars he managed to escape by bribing dozens of federal prison guards in Mexico to hide him in a laundry basket and walk him out the front door in 2001, the official noted.

The 5-foot, 6-inch kingpin, whose nickname means Shorty, became a legendary outlaw who eluded authorities for years and was rumored to live in various locales from Argentina to Guatemala, always on the move.

His empire stretched from North America to Europe and Australia thanks to a sophisticated, international distribution system for cocaine and methamphetamine. Sinaloa’s battles with rival cartels turned cities like Ciudad Juarez and Tijuana into gruesome bloodbaths.

The Mexican national was estimated to be worth $1 billion, according to Forbes magazine, which has listed him among the “World’s Most Powerful People” since 2009 and even ranked him above the presidents of France and Venezuela.

Guzman’s capture resulted from a massive operation that began between Feb. 13 and 17, thanks to intelligence gleaned from recently apprehended top Sinaloa operatives, said Michael S. Vigil, a former senior DEA official briefed on the operation.

The Sinaloa Cartel warred with rival syndicates in Ciudad Juarez for control of the border town. This 2009 crime scene photo shows bullet holes from shootout on a city street.