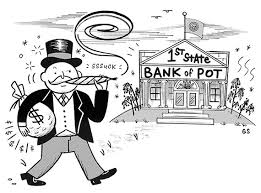 Banks were given a green light Friday to offer services to the legal marijuana industry, but must continue to report any suspicious activity specific to that industry to federal authorities.

Though the historic step brings marijuana businesses closer to legitimacy in states where pot is already legal, it falls short of the legislative action many banks want to see before doing business with marijuana operators. That will be up to Congress to consider.

Colorado marijuana sales
FILE — Marijuana is in jars for customers to look at 3D Cannabis Center in Denver, January, 01 2014. (RJ Sangosti, The Denver Post)
It also makes clear that banks would be helping law enforcement with “information that is particularly valuable” in filing regular reports that offer insights about how marijuana businesses work.

While banks would still be required to file reports identifying clients involved in business deemed illegal under federal law, they would be modified to reflect they are in states where marijuana sales are allowed.

Colorado and Washington are the only states to allow legal recreational marijuana sales while about 20 others allow medical marijuana. But marijuana remains an illegal narcotic under federal law, on the same list as heroin and LSD.

FinCEN said banks would be helping gather valuable intelligence on a once-cloaked industry.

“Now that some states have elected to legalize and regulate the marijuana trade, FinCEN seeks to move from the shadows the historically covert financial operations of marijuana businesses,” FinCEN director Jennifer Shasky Calvery said.

Bankers were less-than-tepid while the marijuana industry reacted enthusiastically to the announcement, acknowledging the allowance for critical business services, but reiterating how an act of Congress will settle the question.

“We’re still not going to bank them,” said Jim Reuter, executive vice-president of FirstBank, the state’s second-largest bank in terms of market share.

“We are not comfortable taking this guidance alone and on its face,” Reuter said. “There’s simply too much at stake.”

Federal lawmakers say they will press on with efforts to ensure pot businesses can bank.

“While this is a huge step in the right direction, there is still much work to be done to ensure that legal marijuana businesses will not be prosecuted in the future,” said Rep. Jared Polis, a Boulder Democrat leading an effort to remove marijuana from the Controlled Substances Act and place it under the regulatory arm of Alcohol Tobacco and Firearms.

Marijuana business owners said it was the first crack in what appeared to be an impenetrable wall.

“While we believe today’s guidance should provide banks some of the assurances they need to begin doing business with the marijuana industry, it doesn’t solve all the problems,” said Michael Elliott, executive director of the Marijuana Industry Group, a trade organization for cannabis stores, “I think we’re waiting to see what the banks’ reactions are.”

Colorado bankers unsure of their next step will get a red light from the Colorado Bankers Association, its executive said.

“They should proceed with maximum caution,” CBA president Don Childears said he’ll advise its members. “But, honestly, we’ll be telling them to not proceed at all.”

Banks currently must file a suspicious activity report any time they suspect a transaction has a drug connection. Under the new guidance, banks would have three tiers of SARs specific to marijuana businesses and dependent on levels of concern.

“This reduces the burden on banks,” FinCEN’s Shasky Calvery insisted in an interview. “Marijuana under federal law requires a SAR. Now, the necessity is limited, reducing the banks’ burden a bit and more importantly clarifies where law enforcement focuses its attention.”

Colorado-grown Charlotte’s Web strain aids Colorado Springs kids with seizures, worries doctors
Denver city council’s Charlie Brown: “I believe in celebrating 4/20″ (video)
Will Denver police ticket smokers at 4/20 rally? (videos)
The marijuana-specific reports would either identify the business as legally operating under appropriate guidelines, identify it as one conducting suspicious activity, or as one where the bank has ended its banking relationship “in order to maintain an effective anti-money laundering” compliance program.

The seven-page guidance also notes a number of “red-flag” scenarios that would require a bank to file a SAR, including for a customer “depositing cash that smells like marijuana” who might be trying to conceal involvement in marijuana-related business activity.

“It’s not a silver bullet, but it’s definitely a step in the right direction,” said Norton Arbelaez, co-owner of RiverRock Wellness dispensaries in Denver. “Is it really the solution we are looking for? No. It falls short.”

Arbelaez said the guidance codifies what most banks already working with marijuana companies — including his — already do, including vetting the businesses and making sure they are licensed.

A memo issued last summer, known as the Cole Memo, indicated federal authorities were unlikely to waste resources on legal businesses that ensured eight DOJ priorities weren’t breached. Those included keeping legal pot away from minors and not funneling proceeds to other states.

Senior Justice officials said banks won’t necessarily be liable if they held a commercial account for a bad-actor marijuana business.

“There could be a scenario where there could be a bad actor on the marijuana side but the banking industry is not going to be subject to prosecution,” the justice official said.

It’s that imprecision that has bankers worried.

“The bottom line would continue to be the need for the (banking regulators) to address in writing all of the many issues of concern to the financial services industry,” said Barbara Walker, executive director of Independent Bankers of Colorado. “The (Federal Deposit Insurance Corporation, Federal Reserve and Office of the Comptroller of the Currency) are simply asleep at the wheel on the many serious issues posed by Colorado’s laws. It’s shameful.”

“Getting any measure passed through Congress is a difficult task,” Fox said. “Just as the (Cole) memo from last year … provided marijuana business owners the confidence they needed to move forward, we believe this provides financial institutions similar comfort.”

The new guidance puts critical importance on a bank’s knowledge of its customers, officials said.

“Thorough customer due diligence is a critical aspect of making this assessment,” FinCEN’s guidance says about a bank’s decision to offer services to a marijuana business.

Childears said it appears to broaden a bank’s liability, not help it.

The fledgling industry saw a lack of banking and credit card services — not all are without it, though most are — as its most serious problem, particularly because it essentially forced those businesses into a cash-only system.

That made for ripe targets and worried business owners, law enforcement and patrons.

“This is a huge victory for our members, our communities, and the banks that take this opportunity to serve a thriving new market,” Smith said in a statement. “Today’s guidance allowing for banking access means better security for our members, easier accounting and transparency, and more resources to invest in our local economies.”

REQUIREMENTS Banks must continue to file suspicious activity reports, or SARs, for any transaction it does with a legal marijuana business. SARs are to be distinguished as marijuana or not.

TYPES OF SARs FOR MARIJUANA

Marijuana priority (business appears to violate one of the federal priorities)

RED FLAGS BY BUSINESSES THAT REQUIRE A SAR FILING

Getting more revenue than reasonably expected

Not adequately proving where all revenue derives from

Being too close to a school

Currency transaction reports on deposits or withdrawals greater than $10,000 remain in effect.