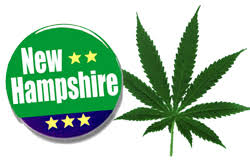 “…it makes you look like nothing more than a college freshman who just wants to get high at any cost.” – Senator Andy Sanborn.

2014 is expected to be a big year for Marijuana in many degrees. However large changes often come with with loud disapprovals, which most of us have become used to and tend to shrug off the discontent of certain individuals. Then someone like Senator Andy Sanborn comes along who you can’t ignore….

Posted by  The Joint Blog:

We received this conversation from a reader, who was “shocked” at how a senator in New Hampshire responded when he contacted him to support cannabis decriminalization.

Below is the conservation.

As I am sure you are aware, the issue of marijuana prohibition has been a widely debated issue in American politics. The tide seems to be shifting and states around the nation are passing decriminalization bills and some are even approving full recreational legalization. Uncharacteristically, New Hampshire seems to be behind the pack when it comes to this issue specifically. In New Hampshire, those arrested with even small quantities of marijuana face harsh criminal penalties that can ruin their lives by disqualifying them from jobs and other things including federal student aid. As of right now, criminals convicted of serious crimes like rape and murder and technically eligible for federal student aid without restrictions but those found guilty of possession of small amounts of marijuana and disqualified for federal student aid for one year after their first offence. The penalties simply don’t fit the crime. New Hampshire’s state motto is Live Free or Die, known for turning down bills for seat belt regulations and some of the most lenient gun laws in the nation, New Hampshire is known for putting the freedom of it’s citizens first even if it means jeopardizing their safety.

In the case of this issue, public safety does not have to be jeopardized. Decriminalization would give offenders a ticket similar to those given for minor traffic violations. This would eliminate the life altering repercussions that can come with a criminal offence. Legalization would give users the freedom to use the substance but with restrictions that could prevent children from obtaining it and restrictions on the use of substance while operating a motor vehicle. Right now, the criminalization of the substance is only benefiting those distributing it on the black market. Even with some of the most strict marijuana laws in the nation, a recent survey puts New Hampshire at number four in the nation for marijuana use per capita. It is clear the war against marijuana use has failed. It is time to stop ruining people’s lives and pumping money into the black market and start regulating a substance that is far less addictive and harmful than alcohol and tobacco. Your job is to represent the people of NH not your personal beliefs, it’s time to listen to the people.

This was the response sent to Michael, from Senator Sanborn:

Thanks for your email and thoughts, although I may ask that you consider that last sentence. I’m guessing you don’t know much about me, my values and what I have been working on in the legislature. Frankly, your suggestion that I do not listen shows ignorance and I find it insulting. There sure is one way to insure a legislator votes against your wishes and that is to insult them………….. I’m thinking if I call the [organization you received a scholarship from] and ask their opinion on legalization, they may have a different opinion (not to mention may be asking you for their scholarship money back…).

I may suggest you first take the time to actually read the legislation, understand it and it’s total ramifications before you comment on it as the bulk of your argument is not considered in it and it makes you look like nothing more than a college freshman who just wants to get high at any cost. Thanks, Senator Andy Sanborn.

“I was obviously shocked at the response”, Michael tells us. “He even went as far as to threaten to call an organization who I had received a scholarship from last year.”

When we asked Michael how the senator knew about his scholarship, he tells us that; “He must have looked me up. It was recently and it was in the newspapers, so I assume that’s how he figured it out.”

Those in New Hampshire who believe that Senator Sanborn should take the issue of cannabis law reform more seriously, and should show more respect to his constituents, can contact him through e-mail at andy.sanborn@leg.state.nh.us, or by phone at 603-271-2609.

Via The Joint Blog