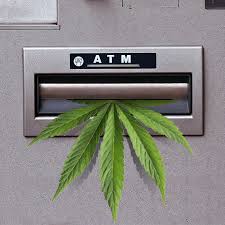 The federal government is preparing to address the biggest problem facing the nation’s marijuana industry. U.S. Attorney General Eric Holder said Thursday that legal marijuana sellers should have access to banks, and he indicated the Justice Department was preparing guidelines that would help pot shops cope with the challenge of running their businesses in cash.

The announcement reflects federal recognition of the central impediment to legal marijuana businesses. In Colorado, which on Jan. 1 became the first state to establish a recreational marijuana market, as well as the 20 states (plus the District of Columbia) that allow medical marijuana, legal cannabis businesses are forced to hoard cash because federal law prohibits banks from transacting with them. As a result, marijuana moguls who comply with state regulations and pay huge sums in taxes must keep massive amounts of cash on hand and take extreme measures to keep the money and themselves safe.

“You don’t want just huge amounts of cash in these places. They want to be able to use the banking system,” Holder said during a discussion at the University of Virginia. “There’s a public safety component to this. Huge amounts of cash—substantial amounts of cash just kind of lying around with no place for it to be appropriately deposited is something that would worry me, just from a law enforcement perspective.”

As I wrote in the print edition of TIME this month (subscription required), the conflict between state and federal law requires small-business entrepreneurs—a cohort that Washington loves to venerate—into acrobatic subterfuge reminiscent of a Scorcese film: leasing secret warehouses to house stacks of bills, darting through alleys with tens of thousands in cash, scrambling delivery schedules to sidestep robberies. While some owners have tenuous accounts at banks, most are forced, in essence, to operate their own. “We call it the Bank of Kristi,” says Kristi Kelly, the owner of multiple retail dispensaries in Colorado, who spends much of each week dealing with the logistical puzzle of transporting cash. “The Bank of Kristi has multiple branches. The Bank of Kristi has service hours.”

Holder’s announcement was not unexpected. Prodded by Colorado officials, sympathetic congressmen, and banking representatives eager for federal guidance, a cadre of officials met privately in Washington last month to address the legal conflict. Industry sources believe the issue will be addressed early this year. Holder’s remarks were a public reminder that the process is underway. “It is an attempt to deal with a reality that exists in these states,” Holder said.

But a yellow light from the Justice Department may not be enough. As long as pot remains a so-called Schedule I drug on par with ecstasy and heroine, banks have plenty to lose by transacting with marijuana companies. Even with a signal that the feds won’t pursue them, banks could still face punishment from zealous prosecutors, or be forced to surrender their charter for violating federal money-laundering statutes. “Everyone has taken a position that it’s just too risky,” Robert Rowe, a lawyer for the American Bankers Association, told me recently. And the nature of the guidance remains to be seen.

A Colorado law-enforcement official says it is possible that the expected federal guidance, which could resemble a 2013 memo that indicated the federal government would take a hands-off approach to the retail pot experiments as they unfolded in Colorado (and, later this year, Washington state), might entice state-level banks to take the plunge, while risk-averse national banks stay away. An act of Congress may still be required to fully resolve the issue.

A passel of legislators in Colorado and Washington have pressed for clarity. (Most are Democrats, but the group also includes House Republican Mike Coffman of Colorado—a reflection of how the issue transcends partisan lines, with many Republicans opposed to federal meddling in what they see as a states’-rights issue.) “Attorney General Holder and the Obama Administration are unquestionably making the right call by allowing banks to work with legal marijuana businesses,” said Representative Earl Blumenauer, an Oregon Democrat. “If these businesses are unable to participate in the banking system, they have to operate with all cash, which invites criminality. It’s an important step toward fixing federal policy toward marijuana.”

The Colorado cannabis industry hailed Holder’s announcement. “Everyone recognizes that the banking issue has created serious public safety and accountability problems for this new industry,” said Mike Elliott, executive director of the Medical Marijuana Industry Group. “We urge Mr. Holder, the Treasury Department, and the Obama Administration to move quickly to create regulations that allow the legal marijuana industry, its employees, and customers to do business with banks just as any other business sector does.”