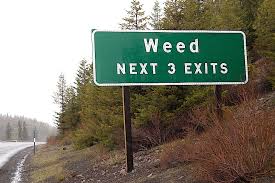 AFP provides this image of legal marijuana being sold in a Denver dispensary.

The No. 1 reason many anti-marijuana propagandists give for keeping weed criminal is that it is a gateway drug.

They claim it leads to other, hard drugs, which makes the government’s ranking of marijuana as more dangerous than hard drugs seem silly.

Using this logic, milk is the ultimate gateway drug. Even people who drink Coca-Cola started on mother’s milk.

A new study in Canada has found the reverse is true for marijuana: It is an exit drug.

The study is in the journal Addiction Research and Theory.

“While some studies have found that a small percentage of the general population that uses cannabis may develop a dependence on this substance, a growing body of research on cannabis-related substitution suggests that for many patients cannabis is not only an effective medicine, but also a potential exit drug to problematic substance use,” the authors wrote.

The drugs cannabis users are fleeing include prescription medicines, alcohol, and cocaine and other illicit drugs.

Authors of the new study, in Vancouver, B.C., said: “Researchers teamed with staff representatives from four medical cannabis dispensaries located in British Columbia, Canada, to gather demographic data of patient-participants as well as information on past and present cannabis, alcohol and substance use. A 44-question survey was used to anonymously gather data on the self-reported impact of medical cannabis on the use of other substances.”

Cannabis dispensaries in Denver advise customers that their products can help heavy drinkers reduce their consumption of alcohol.

A study done by researchers at the University of Colorado, Montana State and Oregon, found that the legalization of medical marijuana resulted in a decrease in alcohol consumption, and therefore was a factor in a decline in auto accident fatalities.