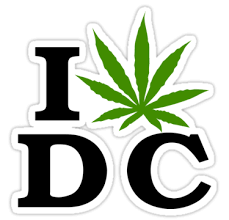 With Support of Mayor and Supermajority of Councilmembers, Marijuana Decriminalization Appears Imminent

D.C. lawmakers will vote Wednesday on legislation that would eliminate criminal penalties under District law for the possession of one ounce or less of marijuana for personal use during a meeting of the Committee on the Judiciary and Public Safety. The panel of five Councilmembers is expected to approve the measure. The bill would next go before all thirteen Councilmembers for final consideration.

The “Simple Possession of Small Quantities of Marijuana Decriminalization Amendment Act of 2013 (Council Bill 20-409)” would eliminate criminal penalties and instead subject a person in possession of one ounce or less of marijuana to a civil fine. The legislation was introduced in July 2013 by Councilmember Tommy Wells (D-Ward 6) with the support of ten out of thirteen Councilmembers.

WHAT: Committee on Judiciary and Public Safety to Mark-up Bill Decriminalizing Marijuana
WHEN: Wednesday, January 15, 2014 at 11:30AM
WHERE: John A. Wilson Building; Room 412; 1350 Pennsylvania Avenue, NW

Last year, the American Civil Liberties Union and the Washington Lawyers’ Committee on Civil Rights and Urban Affairs released groundbreaking reports documenting enormous racial disparities in arrests for marijuana possession in D.C. These reports found that the majority of all drug arrests in the District are for simple possession of marijuana and the vast majority of those arrested are African American. Every year, thousands of people are arrested in the District of Columbia for the possession of marijuana. African Americans in D.C. are eight times more likely to be arrested for marijuana possession than white people – even though government surveys show that both groups use marijuana at similar rates.

A poll conducted in April 2013 by Public Policy Polling, and commissioned by the Drug Policy Alliance and Marijuana Policy Project, found three out of four D.C. voters support changing District law to replace criminal penalties for possession of limited amounts of marijuana with a civil fine similar to a traffic ticket. Furthermore, more than 60 percent of D.C. voters in the survey would support a ballot measure similar to those approved by voters in Colorado and Washington in November, which made marijuana legal for adults and directed state officials to regulate and tax marijuana similarly to alcohol. National surveys conducted last year by Gallup and the Pew Research Center found that, for the first time in 40 years of polling on the issue, a majority of Americans support making marijuana legal. The Gallup poll in October found 58 percent support and the Pew Research Center poll in April found 52 percent support. Last week, a CNN/ORC poll found 55 percent support nationwide for making marijuana legal.

During public hearings chaired last October by Councilmember Wells, witnesses criticized the disproportionate enforcement of marijuana laws on African Americans in the District and supported eliminating criminal penalties for possession. However, the Drug Policy Alliance and other witnesses urged Councilmembers to eliminate or significantly reduce the proposed $100 civil fine. The Drug Policy Alliance urged that a $100 fine would be too burdensome for poor residents and that African Americans would continue to be disproportionately punished for marijuana possession. Councilmember Wells is expected to lower the fine for possession to $25 when Councilmembers consider the legislation tomorrow.

In a letter delivered to Councilmember Wells in September, the Drug Policy Alliance and other community groups urged the elimination of the fines for possession and the decriminalization of home cultivation of a small quantity of marijuana. The letter also urged the Council to destroy all marijuana arrest and conviction records maintained by the D.C. government in order to prevent such a record from serving as a barrier to employment and other opportunities for thousands of D.C. residents who currently have a criminal history for marijuana law violations. In December, Councilmember Wells held a public hearing on legislation introduced by Councilmember David Grosso (I-At Large) that would remove from the public domain many marijuana arrest and conviction records maintained by the D.C. government.  Advocates have praised Councilmember Wells’ leadership on addressing the harms of failed D.C. marijuana laws.

“All it takes is a single arrest for a small amount of marijuana to set in motion years of denied jobs, housing applications and other basic components to leading a self-sufficient life,” said Smith.  “This legislation would help end harmful marijuana arrests and reverse decades of lives derailed by enforcement of marijuana prohibition.”