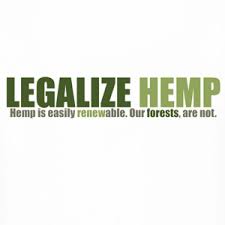 The New York Times wrote Thursday about Colorado’s “marijuana refugees”: Families who uprooted their lives to the move to the state when it legalized pot because the drug has crucial medicinal effects on their children’s illnesses. “I put what fit in my car and drove out here,” Marisa Kiser, whose toddler, Ezra, has had seizures almost since birth, told the Times. No one could have predicted that the state’s legislation would create a community-in-exile of more than 100 families who help look after one another’s children, trade medical tips—and even, in some cases, shared their first Thanksgiving dinner in this new land.

Colorado’s new law is reaping other changes, too, among them the first legal crop of hemp that America has seen in nearly 60 years. Hemp is a cannabis plant, as is marijuana, but it contains almost none of THC, the component that gives pot its potent effect. Still, hemp—which can be used in “products from rope to auto parts to plastics, shampoo to vitamin supplements”—has paid for the stigma attached to its sister-plant: Though it is legal to buy and sell hemp in the U.S., growing and harvesting it have been prohibited. In every state that discusses legalization, hemp’s economic potential comes up: Data from Canada’s legal hemp industry suggests the crop yields revenue of $390 an acre, and the Hemp Industries Association estimates that products from the forgotten cannabis already constitute a $500 million industry in the U.S., according toThe Denver Post. “I think that once people see the value of hemp, it’ll become a no-brainer,” said farmer Ryan Loflin, the Colorado man who has already planted 60 acres of the plant.

CHECK OUT RELEAF’S ONE-ON-ONE INTERVIEW WITH RYAN LOFLIN IN THIS MOTHS RELEAF ISSUE!

Though Colorado’s law legalized hemp farming, and the state is in the midst of craftingregulations for the plant, the federal government could still go after hemp farmers like Loflin. “Federal law does not permit the sale or import of nonsterilized seed suitable for growing,” writes the Post. “It’s the hemp farmer’s equivalent of what recreational-marijuana activists call ‘the year of the magical ounce’ —a reference to the unanswered question of how people can obtain marijuana for current legal use before state-permitted retail facilities open in 2014.” As momentum grows behind marijuana legalization, hemp legalization may develop its own tide, and the economic argument may make it an easier sell; last February, a handful of Democratic representatives introduced a hemp bill into the U.S. House of Representatives—and even Senate Minority Leader Mitch McConnell voiced his support. For now, though, Loflin seems to be the only farmer willing to flout the federal mandate. “You have to be willing to bet the farm,” admitted Tom Murphy of the pro-legalization group Vote Hemp in an interview with The Miami Herald.

Like pot, hemp has a following in part for what it represents. Because it requires lesswater and land to grow than cotton, it has long been a favorite of the environmental movement, and has become not only a tool but a totem of sustainable and healthy living. On the flip side, hemp may have a hard time shedding the suspicions of the traditional farming community. “We’re a conservative bunch around here,” a Colorado banker said when asked about funding hemp farms. “I imagine we’d probably stick with our core crops of corn and milo and wheat.” But old dogs can learn new tricks. He added: “In a few years, who knows what might happen?”